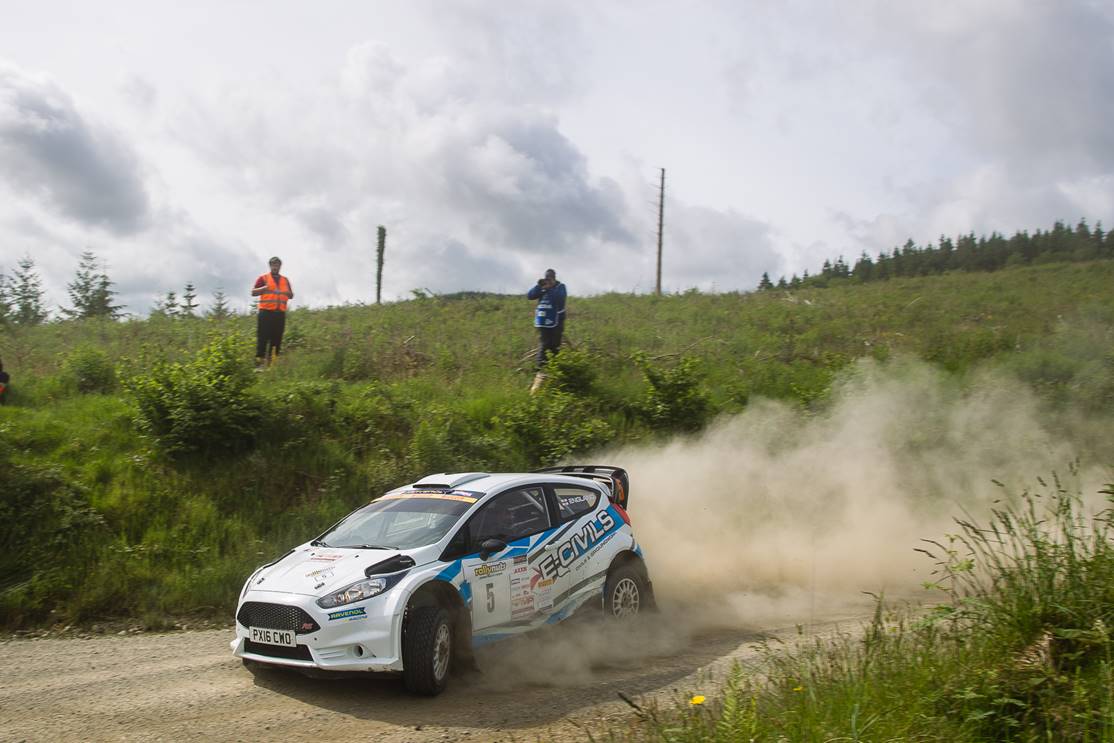 Competitors in the Pirelli MSA Welsh Forest Rally Championship are back in action on Sunday (4th March) just two weeks on from the opening round of the season.

Osian Pryce and co-driver Dale Furniss took maximum points on the Visit Conwy Cambrian Rally but, in their absence this weekend, a number of their rivals will be looking to close the gap in the championship standings with a strong performance on the Newtown based Grooms Garage Mid Wales Stages.

Among those crews are Lampeter duo Dylan Davies and Llion Williams who finished in fourth place on the opening round. Llangefni’s Keith Parry and Eryl Evans, from Aberystwyth, are two points behind them and will be looking to improve on that opening round performance.

Both pairings can expect a strong challenge, however, from Bryncrug drive Andy Davies, also in a Subaru Impreza, who will make his first Championship appearance of the year teamed up with co-driver Max Freeman.

Freeman, from Stafford, took outright victory on the Cambrian Rally alongside Derbyshire driver Ollie Mellors but the team were ineligible for Championship points.

Another driver making his first appearance of the year will be Surrey’s Wug Utting and co-driver Bob Stokoe. Like Andy Davies, Utting led the Championship standings for part of last season but will also be looking to claim points in the Group N category for less modified cars in his Impreza. Wug’s son Max will also be in action along with co-driver Mike Ainsworth in their Ford Fiesta ST.

Other front runners should include West Country husband and wife pairing Martyn and Dawn England in their R5 specification Ford Fiesta and Championship stalwart Geoff Cottrill teamed up with Nathan Crew in a Mitsubishi Lancer Evo IX.

The Group N standings are currently led by former champions Paul Davy and Roger Allen, both from Worcester while looking to come back from a non-finish on the opening round are Staffordshire driver Nev Davies and co-driver Chris Jones from Newbridge-on-Wye, also in an Impreza.

The two-wheel drive category one again looks set for a hard-fought battle with Newark driver Barry Jordan and Newcastle Emlyn’s Paul Wakely taking on the ranks of the Ford Escorts and BMWs in their Fiat 131.

Among the Escort crews will be Gary Smith and Newtown’s Jonny ‘Tad’ Evans while looking to uphold BMW honours will be 2017 two-wheel drive champions Andrew and Jamie-Lee Fox as well as Worcester’s Colin Griffiths with a yet to be named co-driver.

The RAVENOL Welsh Challenge is a new addition to the Championship this season and is open to competitors who have not previously finished in the top 10 overall on a Championship round. With the season long prize fund valued at more than £3000 there will be plenty of crews keen to rise to the challenge.

Crews on the event, organised by Newtown and District Automobile Club, will leave the start line at the town’s Hafren Theatre from 9am to tackle five special stages before returning to the Theatre from 3:30pm. Spectators will be able to see the cars in action at the Sweet Lamb Rally Complex.

Note to Editors: Credit for the pic: rallysport media

PRYCE GETS IT RIGHT FOR CHAMPIONSHIP LEAD 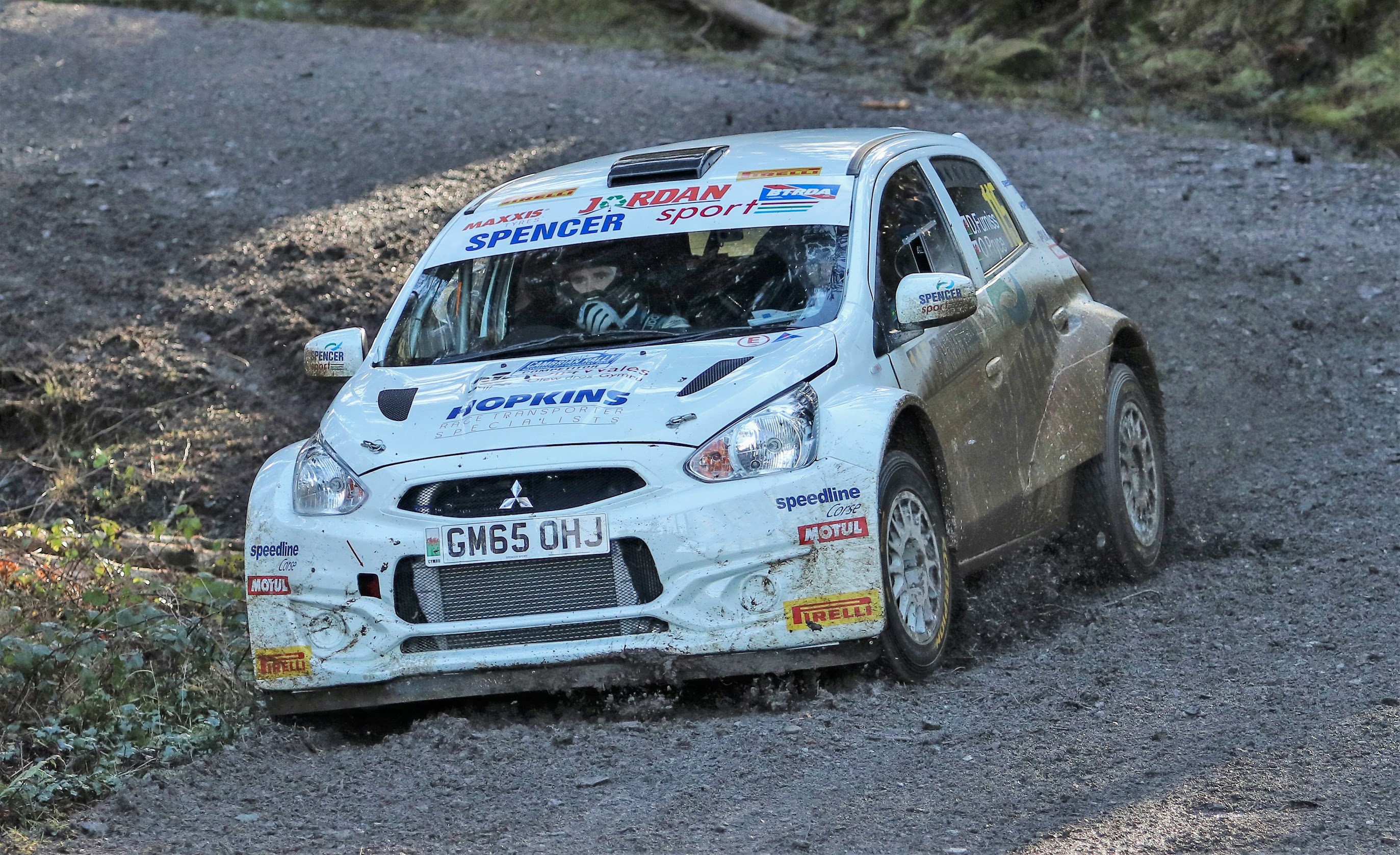 Saturday’s Visit Conwy Cambrian Rally turned out to be a day of firsts. The first round of the Pirelli MSA Welsh Forest Rally Championship, maximum overall driver’s points went to Osian Pryce as he contested his first ever stage rally behind the wheel of a right-hand drive car.

Maximum co-driver’s points, meanwhile, went to Max Freeman as he claimed his first outright win on a stage rally. The 2016 champion junior co-drive and 2017 champion Group N co-driver teamed up with Derbyshire driver Ollie Mellors in his Proton Iriz with a last-minute entry to the event. It was the duo’s first rally together.

Although the snow and ice that cause the abandonment of last year’s event were absent, competitors reported that the special stages in the North Wales forests were extremely slippery.

One of the first competitors to fall victim to the conditions was Simon Rogers who rolled his Mitsubishi Lancer Evo VI heavily on the opening stage in Penmachno Forest. Simon was taking to hospital for precautionary checks but was able to attend the finish of the event on Llandudno seafront where he was full of praise for the event’s rescue and medical teams.

Matt Edwards took the lead on the opening stage ahead of fellow championship contender Hugh Hunter with Mellors third. North Wales driver Edwards effectively went out of the event, on the next stage, however, when he hit a tree stump. Although he returned to the event later in the event in his Ford Fiesta setting further fastest stage times, two maximum stage times left him out of contention for overall honours.

Mellors and Freeman took the lead on stage 2 and would retain it all the way to the finish. Meanwhile Osian Pryce and Dale Furniss began their move up the leaderboard in their Mitsubishi Mirage enabling Osian to take maximum driver’s points with Dale second among the co-driver. Second place driver’s points went to Julian Reynolds in his R5 specification Ford Fiesta with Hugh Hunter third in his WRC version of the same car.

Former champions Luke Francis and John H Roberts were forced to retire their Ford Fiesta World Rally Car after ripping a wheel off on stage 5. Also out on the same stage, with mechanical problems on their Mitsubishi Lancer Evo IX, were Group N leaders Tom Naughton and Will Rogers. That promoted former Group N champions Paul Davy and Roger Allen in their Subaru Impreza. They finished ahead of Dan Moss and Sam Allen in their Evo IX with Zak Hughes and Tom Wood taking third place in the Ford Fiesta ST.

The two wheel drive category provided an inter-family battle with John Rowlands and Glen Latham taking the honours in their Ford Escort after Ieuan Rowlands and Emyr Hall suffered a late puncture on their Hillman Avenger.

New to the Championship for this year is the RAVENOL Welsh Challenge for competitors who haven’t finished in the top 10 on a previous Championship round. Topping the driver and co-driver standings respectively are Evo IX crew Matthew Hirst and Declan Dear with Ford Escort pairing Rob Dennis and Andrew Boswell second, and Zak Hughes and Tom Wood third.

Competitors have just a fortnight to round two of the Championship, the Newtown based Grooms Garage Mid Wales Stages on Sunday March 4th.

You can find out more about that rally at http://www.newtown-mc.co.uk/mid-wales-stages.html and about the Pirelli MSA Welsh Forest Rally Championship at wnrc.wamc.org.uk, on the Championship Facebook page and on Twitter @WnRC.

Note to Editors: Credit for the pic below should be given to ni:media

The organisers of the Pirelli MSA Welsh Forest Rally Championship have unveiled details of a special mid-season bonus for Championship contenders.

Geoff Jones, Managing Director of Geoff Jones Motorsport is to provide a day’s training for the competitors who lead the Overall Championship, the under 23, Group N, and two-wheel drive categories and the RAVENOL Challenge following the fifth round of the nine-round series, the Plains Rally.

The day will cover car set up and preparation as well as driving technique with the venue and exact date to be announced very shortly.

Announcing the plans, Championship co-ordinator Dave Evison said, “We are very grateful to Geoff and his team for their support. Geoff is, of course, a leading car preparation specialist as well as being a hugely experienced driver. I’m sure the training that he can provide will be invaluable for any Championship contender.”

Confirming his support, Geoff Jones commented, “We are delighted to put something back into rallying in this way. We hope the day will be an enjoyable one for everyone present but, more importantly, a useful one.

You can find out more about Geoff Jones Motorsport at www.geoffjonesmotorsport.com and about, the Pirelli MSA Welsh Forest Rally Championship at wnrc.wamc.org.uk, on their Facebook page and on Twitter @WnRC.