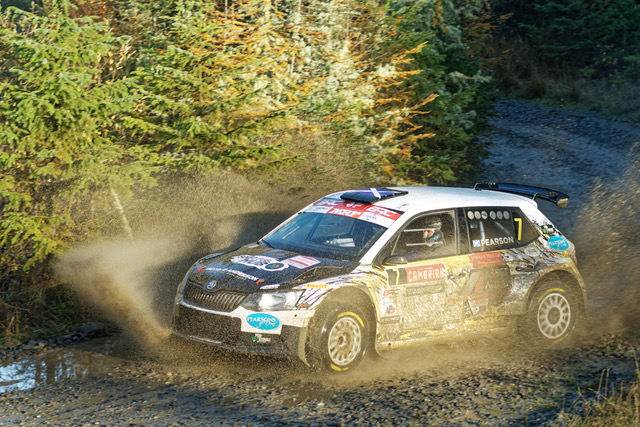 Garry Pearson has increased his lead in the 2021 Motorsport UK Pirelli Welsh National Rally Championship after scoring maximum points on the Visit Conwy Cambrian Rally, which is his second series win in a row.

Co-driven by Niall Burns, Garry made a great start in his Asset Alliance Å koda Fabia R5 to establish an early lead which he was able to maintain until the finish, despite a small issue with the car on the afternoon loop of stages.

"We started in the morning with a bit of a push to try and get an early lead, which was just as well because on the fifth stage in the afternoon we hit something and bent the steering," said Garry.

"It got progressively worse, and for the last couple of stages we were forced to back off. But by then we had established a good lead and were able to maintain it until the finish."

The Cambrian Rally proved an extremely challenging event, with recent heavy rain leaving the gravel roads in Gwydir, Penmachno and Alwen forests with a lot of deep standing water and the additional hazard of low sun on both the early morning and late afternoon stages. 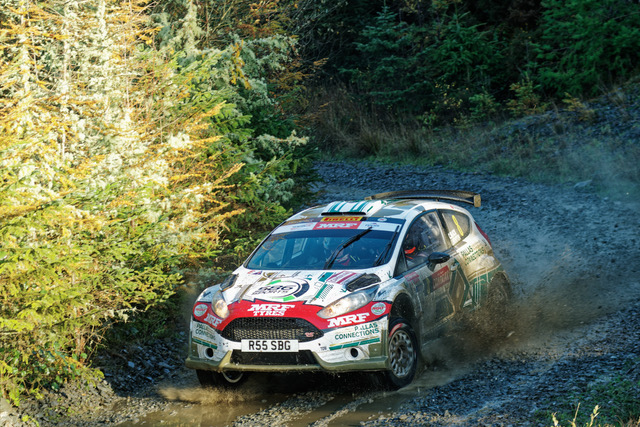 But it was a challenge many rose to, including Callum Black, pictured, who got his title challenge back on track with a second-place finish in his Pallas Connections-backed Ford Fiesta R5+. A puncture on SS4, a fast fifth gear brush with a hedge on SS5 and a slight ride up a grassy bank on the final asphalt stage couldn't prevent the 586 Sports team driver and co-driver Jack Morton from scoring a magnificent second podium finish, having netted maximum WNRC points on the opening Nicky Grist Stages. The result moves Callum up to third in the overall drivers' standings and in with a shout of the title. 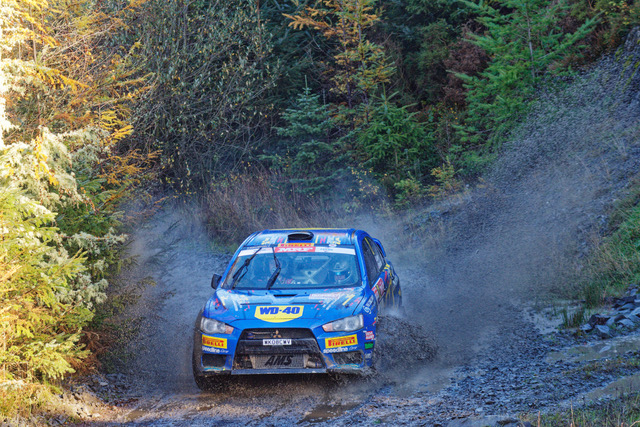 George Lepley also had a great run on the Cambrian. Not only did a superb performance in his WD-40 Mitsubishi Evo X net him a third place WNRC points finish, but he also clinched the Pirelli Welsh Junior title. His reward is a prize of a test in a PCRS Rallysport-prepared Hyundai i20 R5, organised by OnThePaceNote.co.uk. Co-driven by Tom Woodburn, George's fantastic result in North Wales puts him second in the overall drivers' standings, six points behind Garry and 15 points ahead of Cullum.

Matthew Hirst/Declan Dear finished fourth in the WNRC section in their Delta Mitsubishi Evo IX, despite the spare wheel coming loose in the boot on the opening stage and dislodging the diff pump. They also survived a couple of punctures during the afternoon loop of stages. 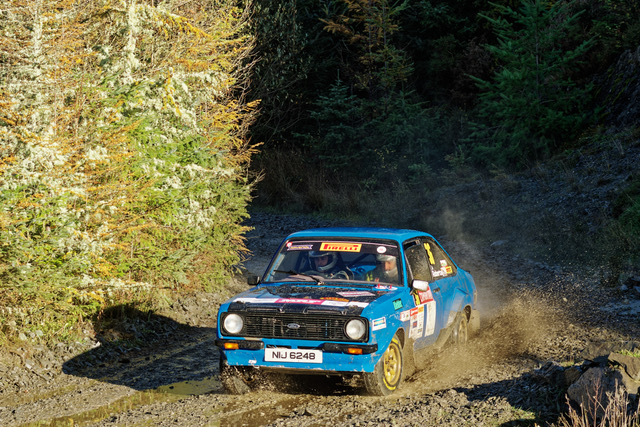 Owen McMackin was also in inspired form, finishing sixth overall in his Escort Mk2. Co-driven by Lee Taylor, the result gives Owen the lead of both the Restruct-sponsored Two-Wheel Drive category and the RAVENOL UK Welsh Challenge. 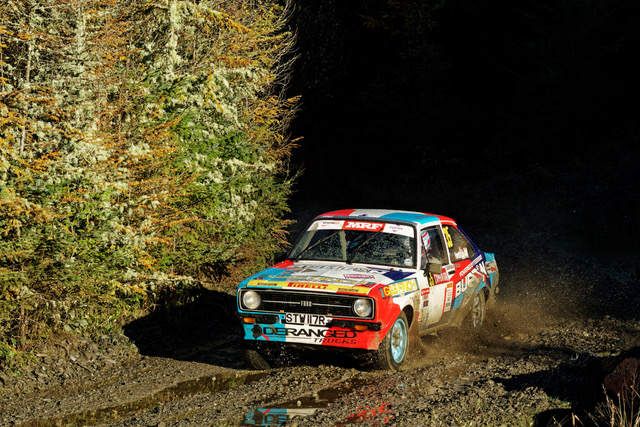 Ashley Davies remains second in Two-Wheel Drive category and moves up to second in the Welsh Challenge after he and co-driver Sam Fordham mastered the conditions in their Escort Mk2.

Unfortunately, it wasn't such a good day for David Crossen. Coming into the event leading both categories the Comber driver picked up a puncture on the opening stage and, together with co-driver Aileen Kelly, retired his Escort Mk2 on the afternoon loop.

Paul Street has taken the lead in the hotly contested Pirelli Welsh Historic Cup after scoring maximum points with a controlled drive in his Escort RS1800 Mk2. Partnered by Ian Jones, Paul picked up a puncture and bent a wheel on the opening stage, but a more cautious approach paid dividends after that.

Robert Gough moves up to fourth in the Pirelli Welsh Historic Cup after finishing second (co-driven by Jack Bowen) in his Escort Mk2, which was a magnificent result considering that they have entered the car on the Roger Albert Clark Rally and were keen not to damage it. 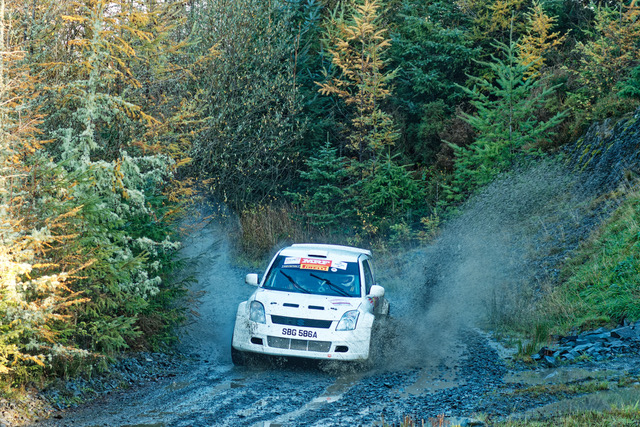 Steve Black has clinched the class W3 title after a great drive in his Suzuki Swift 1400. Co-driven by Paul Morris, the 586 Sports team driver was able to ease off in the afternoon when rivals Dave and Toby Brick suffered clutch failure in their Vauxhall Nova

Dan Jones/Cyril Jones have clinched the W10 title after securing their third straight class win in their Vauxhall Nova. 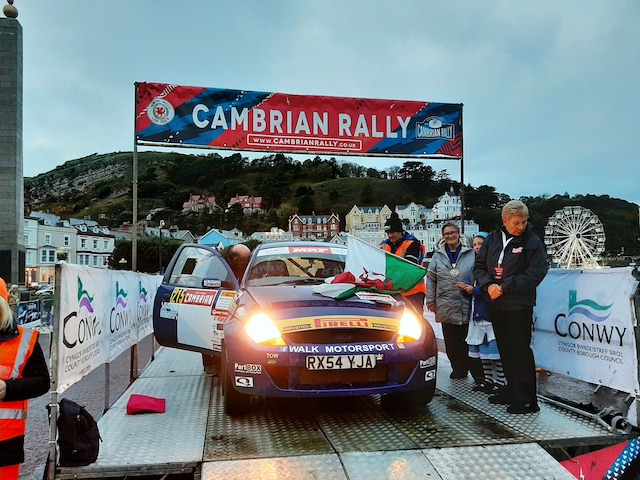 Adrian and Matthew Walk continue to lead W2 in their PartBOX Ford Ka and scored maximum class points on the Cambrian having survived a couple of spins in SS2 when the windscreen misted up and a puncture on SS4.

While Matthew has secured the W2 co-drivers' title, Adrian is in a close battle for the drivers' trophy with Ross Clements who (co-driven by Christopher Lear) enjoyed a good run in his MG ZR.

Ricky Crone has extended his lead in the Pirelli Welsh Road Rally class to five points after he and Daniel James won the category for a second time in a row in their Escort Mk2. Early leaders Robi Wood/Osian Davies remain second in the standings after finishing second on the Cambrian in their Escort Mk2 while third place Graham Thatcher/Tim Samuel could still win the title after another strong performance in their Peugeot 206GTi. Mark Lennox lost time when his Escort Mk2's windscreen misted up on SS1 and he caught a car on SS2. He and co-driver Rhodri Evens recovered well, but their third-place finish leaves them a little short on points to win the title this year.

The tough terrain contributed to several retirements including Tom Llewellin/Ross Whittock (Brace's Mitsubishi Mirage), Dylan Davies/Dafydd Evans (Subaru Impreza) and Ioan Lloyd/Sion Williams (West Wales Rally Spares Peugeot 208 R2) all of whom hit the same outcrop of rock on SS2 which damaged the suspension of each car and forced them into instant retirement. Tom was particularly unlucky as the impact threw the car into a roll.

Russ Thompson/Stephen Link stopped after SS1 when their Dunnow Plant Mitsubishi Evo IX picked up an electrical problem, Harry Gardner/Elliott Graham also retired their Mitsubishi Evo 9 on the opening stage, a severe misfire with their BMW 325's engine forced Andrew Fox/Jaime-Lee Fox out on SS2 while that was also as far as Alex Moore/Merfyn Williams got in their Subaru Impreza.

With cameras on every stage, Sideways Media will produce a multi-film edited highlights package featuring competitors from all the classes within the Pirelli Welsh National Rally Championship to be broadcast on the Championship's Facebook and YouTube channels this week.

The final round of the 2021 Pirelli Welsh National Rally Championship is the Rallynuts Stages Rally on Saturday 13 November.

Provisional overall driver points after Round 3: