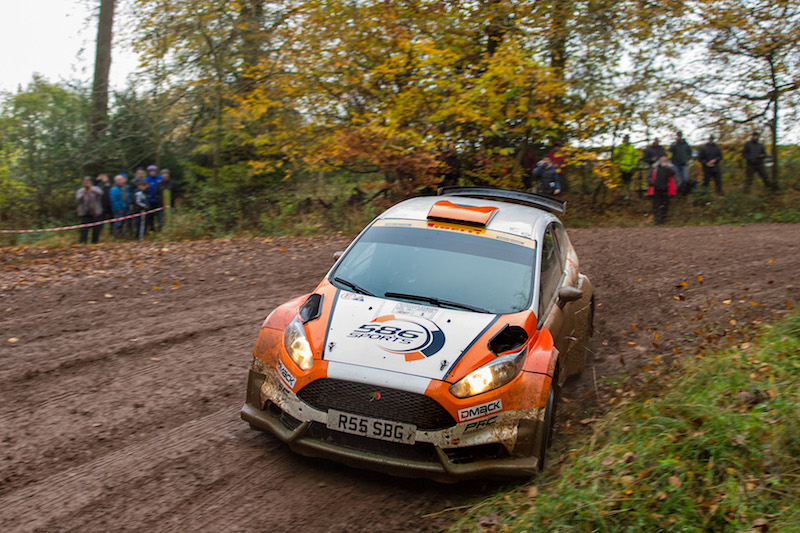 A fourth maximum points score in as many rounds contested has secured the 2017 Prelli MSA Welsh Forest Rally Championship for Callum Black.

With treacherously slippery conditions greeting competitors on the morning stages of the Winners Garage Wyedean Stages Rally, the Brackley driver and co-driver Elliott Edmondson were among many to suffer early spins.

Despite that, they led the event from start to finish in their 586 Engineering Ford Fiesta R5 to secure their respective Championship titles.

The absent Wug Utting took third place among the drivers, one point clear of Scott Faulkner and Simon Rogers with Faulkner just pipping Rogers on countback.

The slippery conditions early on caught out two wheel drive front runner Colin Griffiths as he went off the road and into retirement. That handed the two wheel drive crown to fellow BMW driver Andrew Fox ahead of Griffiths with third place in the Championship going to Chris Powell. He and co-driver Jim Lewis won the category on the day in their Talbot Sunbeam. They finished ahead of the Escort of Tony Williams and Karen Philps, Rob Dennis and Andrew Boswell finishing third in their Escort.

Among the two wheel drive co-drivers, Jaime-Lee Fox wins the category after a tie-breaker, having finished on equal points with Ian Jones, while third place went to Toby Brick.

With Rhydian Price already having secured the Junior driver title for competitors under 23, Elliott Edmondson claimed the co-driver’s crown ahead of Dom Adams and Simon Jones.

Tony Williams did enough to finish ahead of Rob Dennis in Class 6 and Tim Bevan takes the Class award in Class 7. Class 8 honours go to Simon Rogers with the WRC Class going to Peter Stephenson.

The RAVENOL Welsh Challenge, run in association with the Championship, was a closely fought affair. Andy Davies takes the top spot but just five points separate the next five drivers. Runner up is Colin Griffiths while third place goes to Martin Walters ahead of Callum Black, Simon Rogers and Wug Utting.

The opening round of the 2018 Championship will be the Llandudno based Cambrian Rally, organised by North Wales Car Club which takes place on Saturday 11thFebruary. You can find out more about that event on their web site, cambrianrally.co.uk, and about the championship at www.wnrc.wamc.org.uk, on their Facebook page and on Twitter @WnRC.