Hirst Seals Hat Trick of Wins with Victory on the Plains 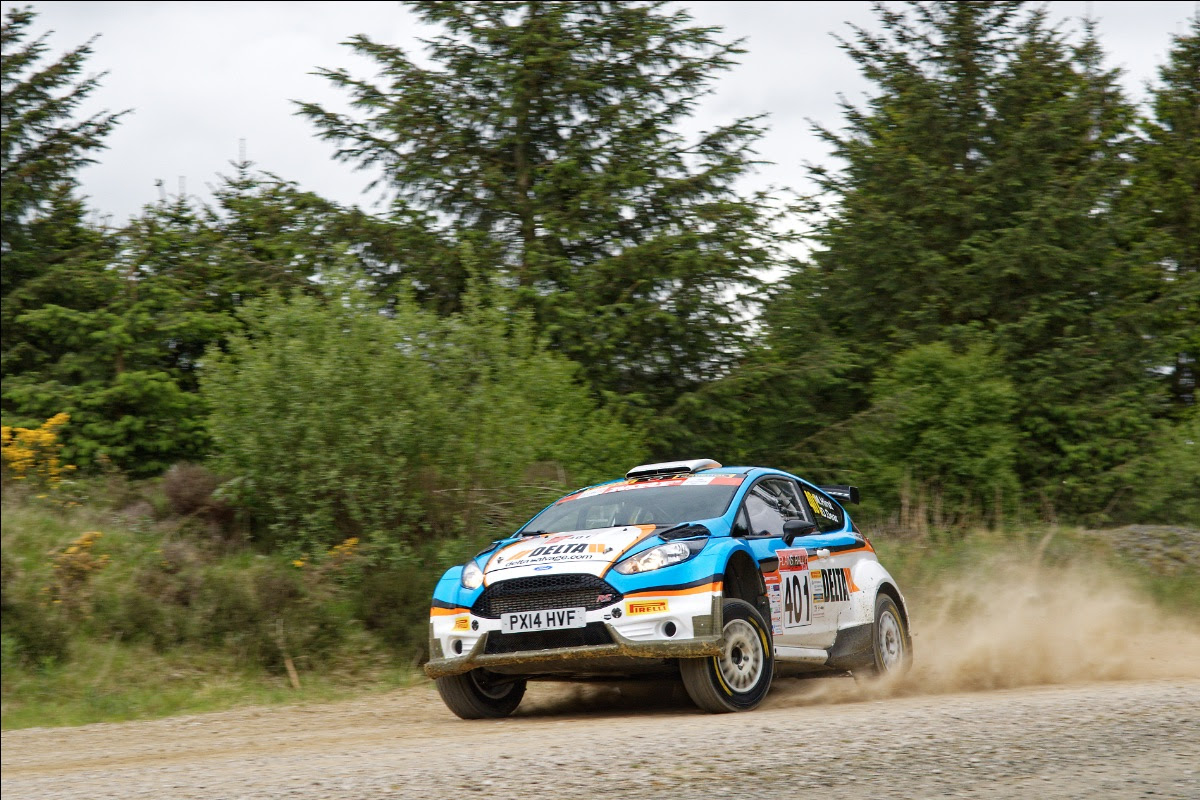 Matthew Hirst has made it three wins from three starts in this year's Motorsport UK Pirelli Ravenol Welsh Rally Championship after scoring victory on the Plains Rally (Saturday 21 May).

Co-driven by the soon to be married Declan Dear, Hirst clinched another impressive victory in his Pirelli-shod Delta Salvage Ford Fiesta R5+, this time winning by 1 minute and 25 seconds.

With Hirst's nearest rivals Dylan Davies/Mark Glennerster retiring their Å koda Fabia R5+ on the opening stage, he has increased his lead at the top of the drivers' standings to 22 points.

"It certainly wasn't an easy day, with three punctures and a few other headaches along the way," admitted Hirst.

"The steering rack locked solid just after the podium ceremony, so we were very lucky for it to happen after we'd reached the finish.

"Next up is one of my favourite events, the Nicky Grist Stages - with just the small matter of Dec and Gemma's wedding in between!" 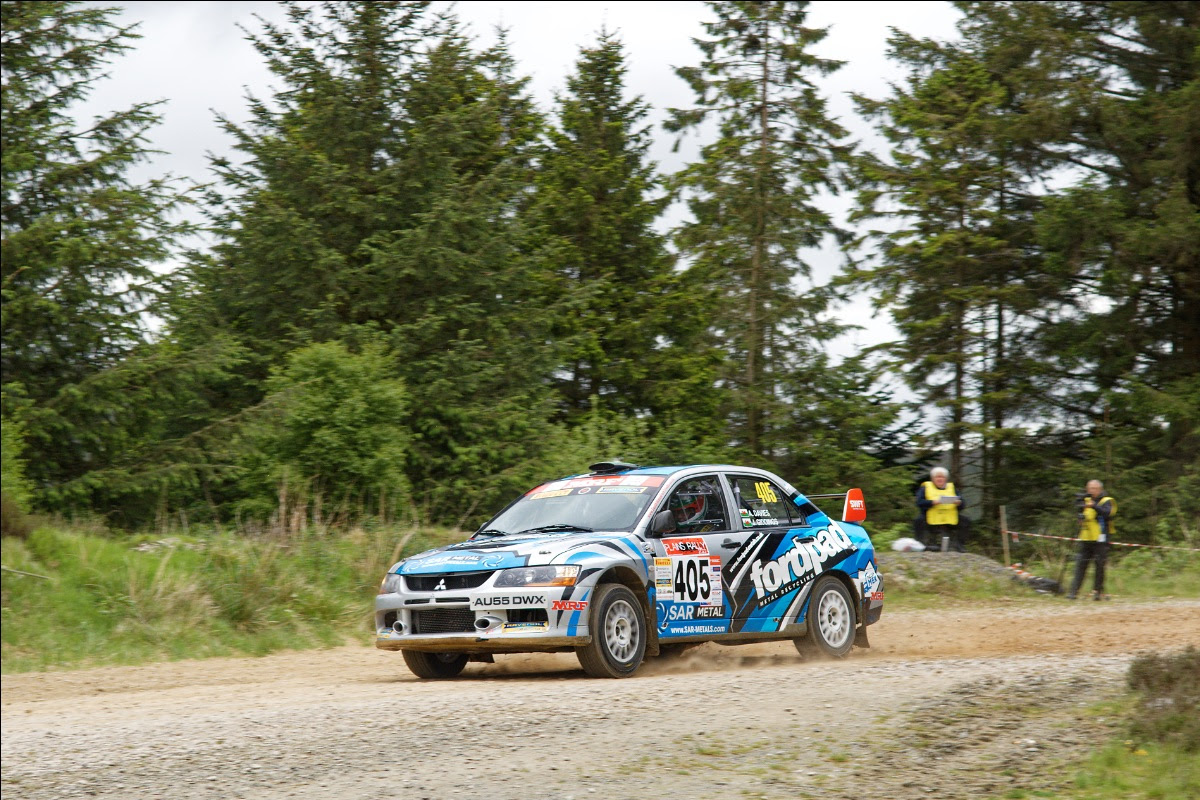 James Giddings, pictured above,  finished second in only his second event in his newly acquired Group N Fordpad Mitsubishi Evo 9. Co-driven by Aled Davies, the former Fiesta ST Trophy and CitroÃ«n C2 Challenge champion drove superbly well to eventually get the better of Bob Morgan/Ade Williams - who continue to lead the Ravenol Challenge after an excellent run to the podium in their Winner Garage Å koda Fabia R5+. 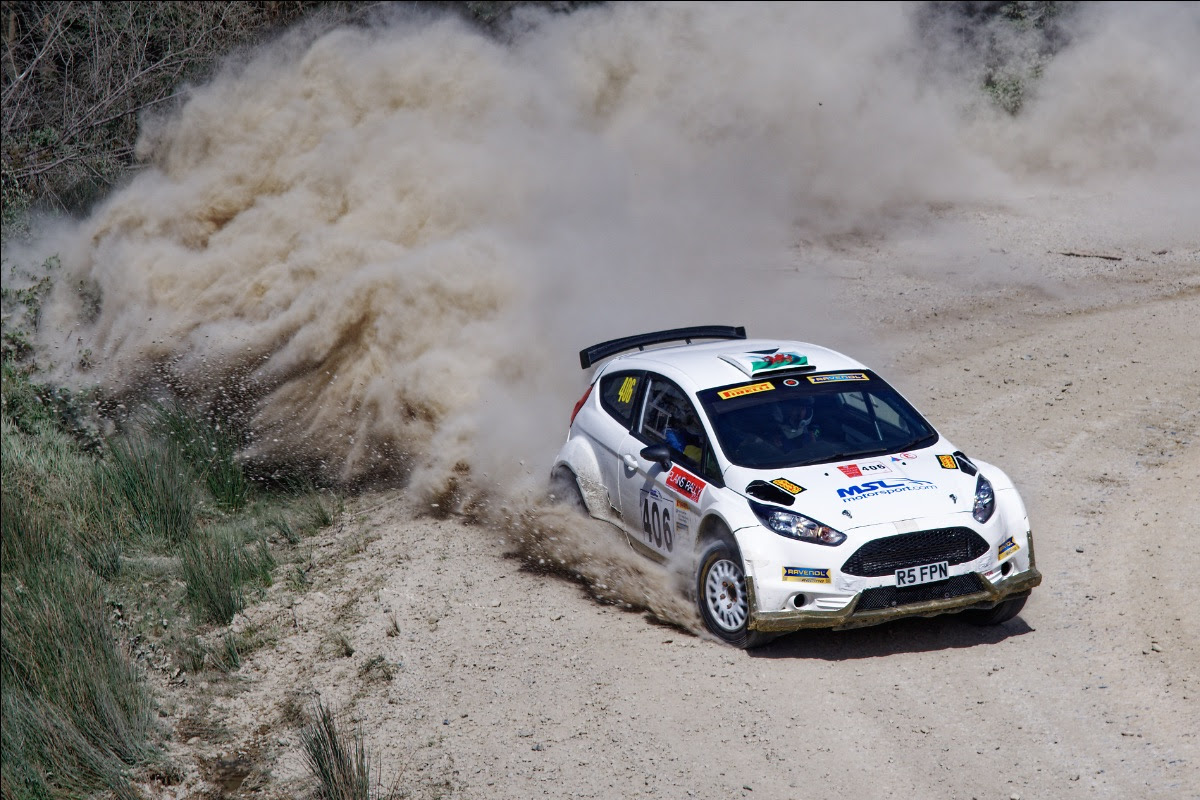 Bob Ceen, pictured above, suffered a puncture on the morning loop of stages, but after that the 2001 and 2015 Welsh champion flew in his 'National spec' Ford Fiesta R5. Co-driven by Shaun Layland, a good afternoon's performance netted a very well earned fifth-place Welsh Championship points finish.

Simon Rogers (co-driven this time by Matthew Baddeley) had a much better run this time out in his Mitsubishi Evo 6. A rear right puncture in the afternoon was nothing compared to what he's had to survive in the previous two rounds, and eighth-placed Welsh Championship points was a just reward.

Paul Walker/Geraint Thomas had a great run in their Green Paw Subaru Impreza. A morning puncture didn't prevent them from finishing ahead of Richard Ceen/Alun Hayward in the 4WD section, although the latter suffered launch control issues in their Ford Focus WRC05.

Benj Ceen/Caron Tomlinson lost over five minutes in SS4 in their MSL-prepared Ford Fiesta R5 and finished down the order, while Dave Tomlin/Keith Ashley retired their Axon Ford Fiesta R5 during the morning loop of stages. 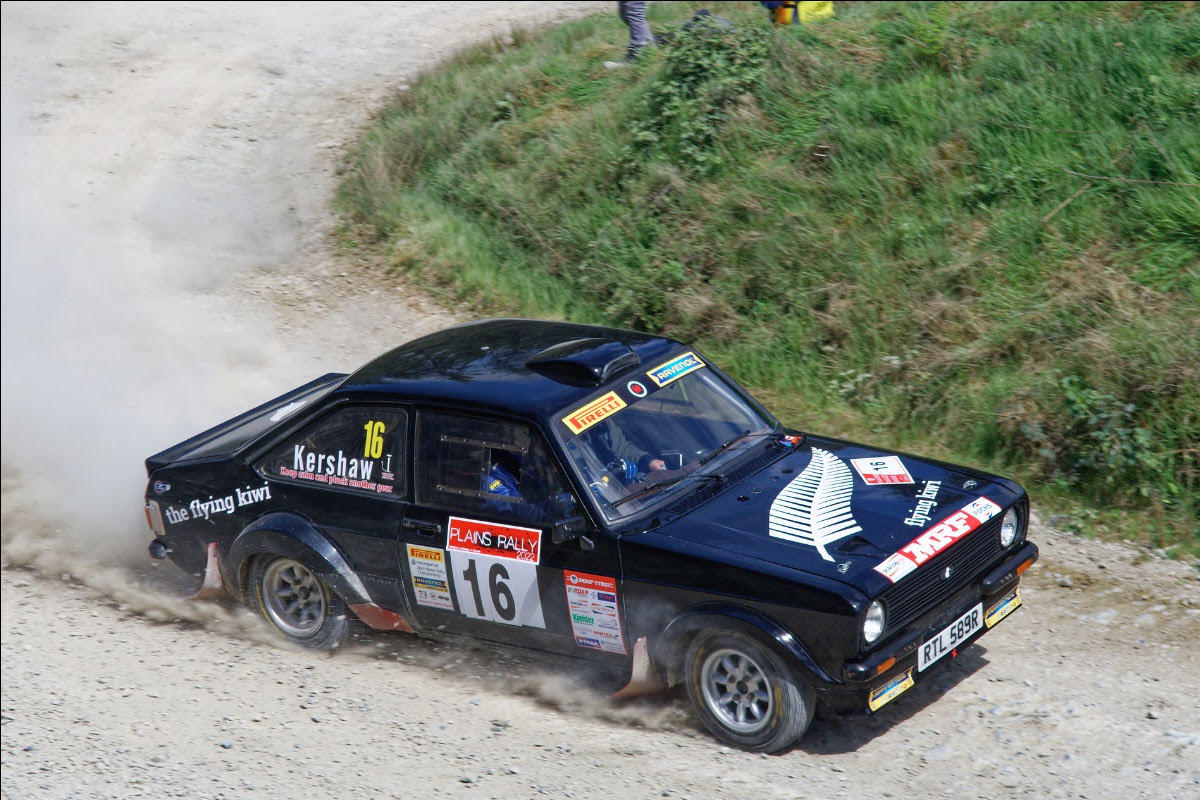 Kevin Metcalfe/Ian Jones picked up a puncture on the opening stage in their 3-litre BMW E30 but recovered to score second place 2WD points - with the Horsham driver now second in the standings, just five points behind Kershaw.

Matthew Jackson remains third in the 2WD class, and leads class W4, after he and co-driver Sasha Heriot put in another great performance in their MJ Rallying Ford Fiesta R2T

Philip Jones/Ryan Griffiths enjoyed a good run in their Ford Escort and are now fourth in the 2WD section. Andrew Fox/Jaime-Lee Fox survived a nervous final road section after their Xwatch Safety Solutions BMW 325 broke a driveshaft on the last stage.

Michael Sawyer/Gareth Price enjoyed a good day in their 2350cc Datsun 1600, Geoffrey Phelps/Colin Jenkins survived a big moment on SS6 which damaged the steering on their Hartpury Farms Escort Mk2, Matthew Honeyborne/James Curtis recorded their first finish of the season in their BMW 328 Coupe, Clive Price/John Fellowes had to nurse their BMW Compact to the finish and Alun Horn/Ian Beamond enjoyed a great day and survived sliding wide on the final stage to reach the finish in their Ford Escort Mk2.

Ashley Davies/Sam Fordham had been leading the Welsh 2WD class going into the Bala-based event in their Burton Power/G&B Finch/Deranged Trucks Ford Escort RS, but stopped in SS2 - which drops them down to fifth in the standings. 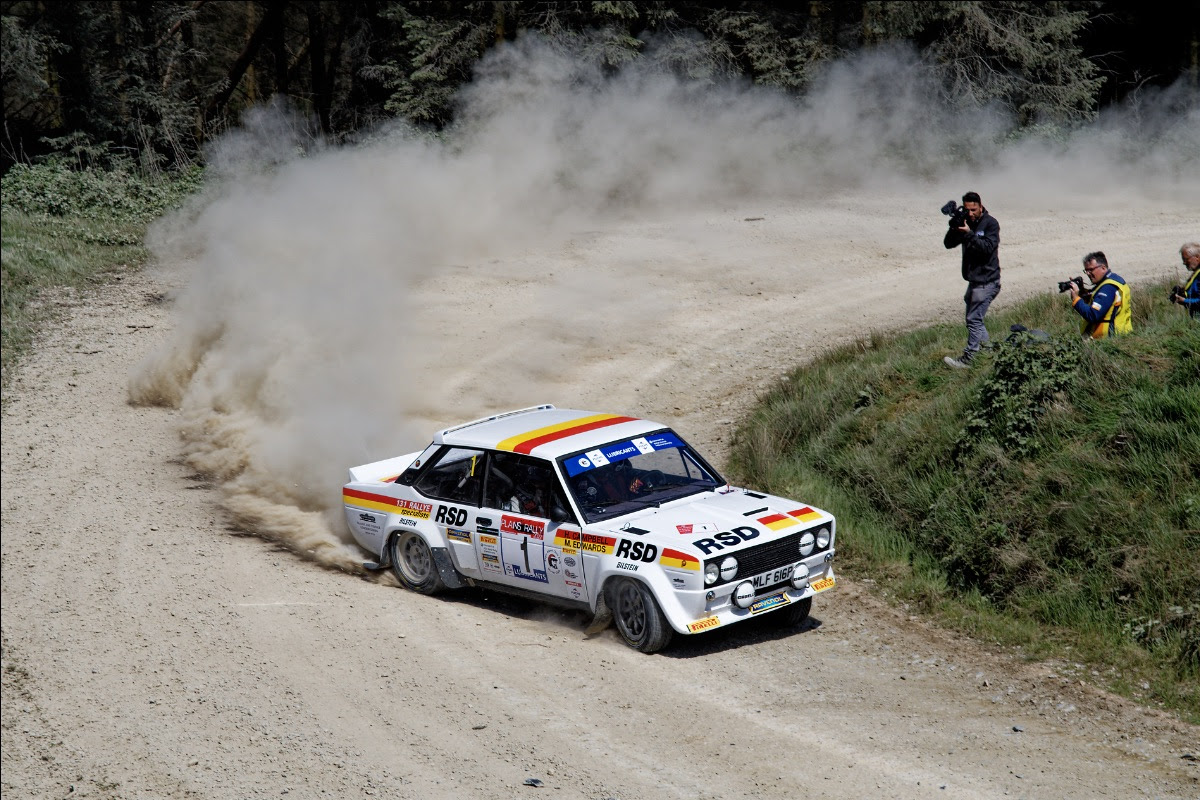 One of the stars of the Plains Rally was Matt Edwards,pictured above,  who scored his third straight victory in the Restruct Welsh Historic class W8 and picked up points for fourth overall in the Welsh Championship drivers' standings. Co-driven by Hamish Campbell, the triple British rally champion was simply outstanding once again in his Fiat Abarth 131, winning the 2WD section of the event by exactly a minute. The result also moves Edwards up to second in the overall Welsh driver standings. 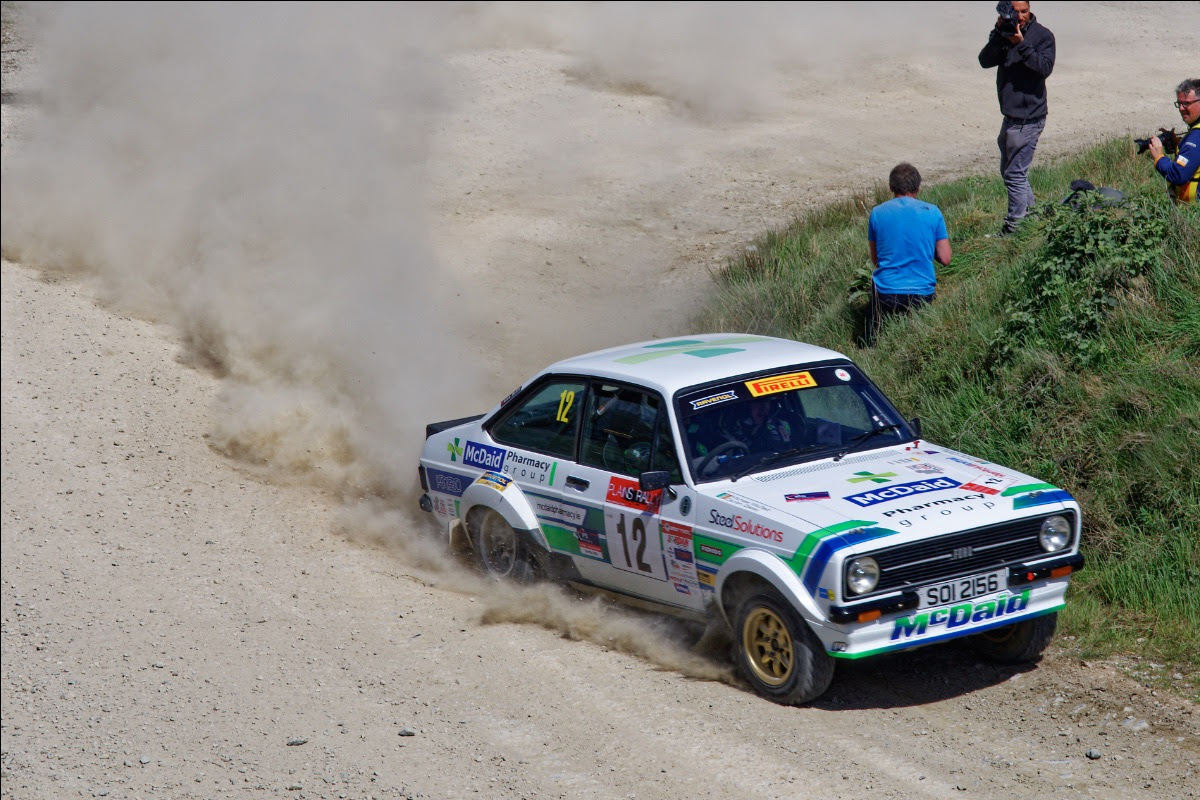 Michael McDaid/Declan Casey, pictured above, had their best run of the season to date, finishing second in class in their McDaid Pharmacy Escort RS1800 Mk2 - and with that getting themselves onto the list for a chance to win the David Stokes Historic Challenge award for drivers and the Guy Weaver award for co-drivers at the end of the season. 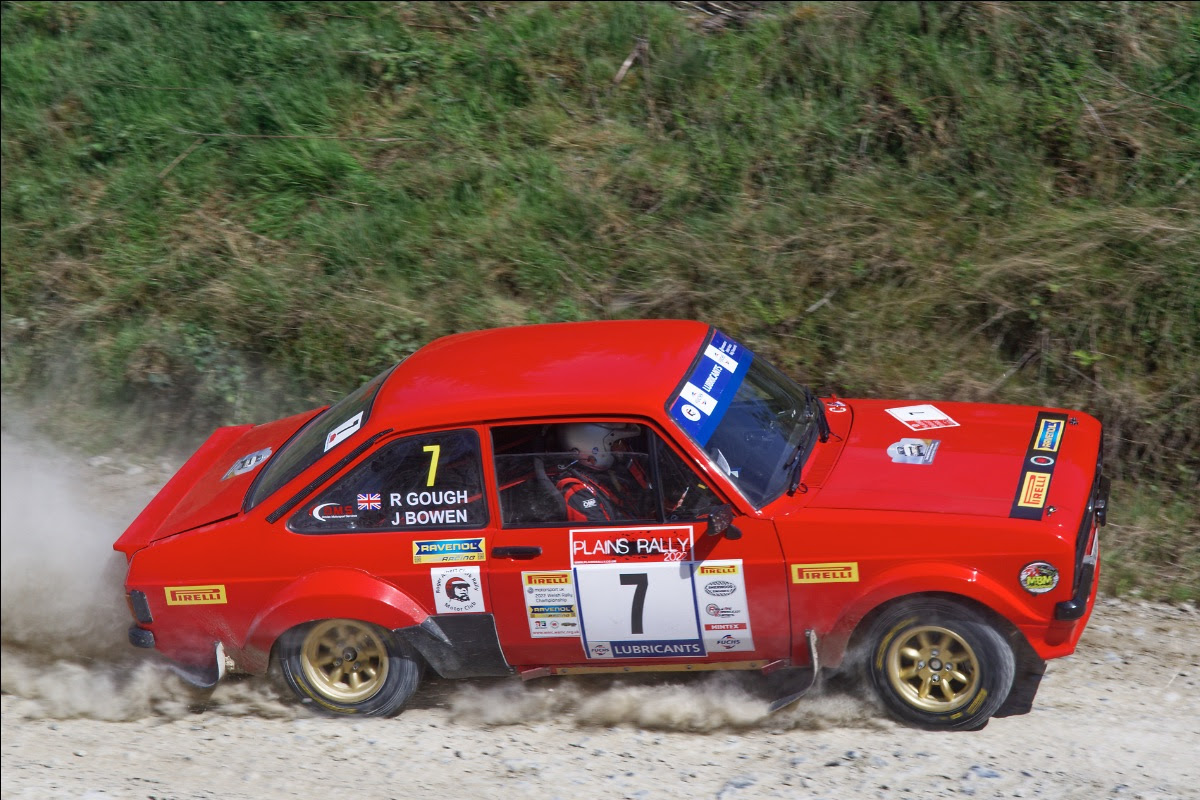 
Owen McMackin/Barry Ferris had a frustrating day, which began when their BJT Hire Centre Escort Mk2 dropped onto three cylinders on SS3 and their attempts to nurse it home for a finish failed. Meanwhile, Nick Elliott/Peredur Davies retired their Fiat Abarth 131 on the road section after SS2 with engine problems. 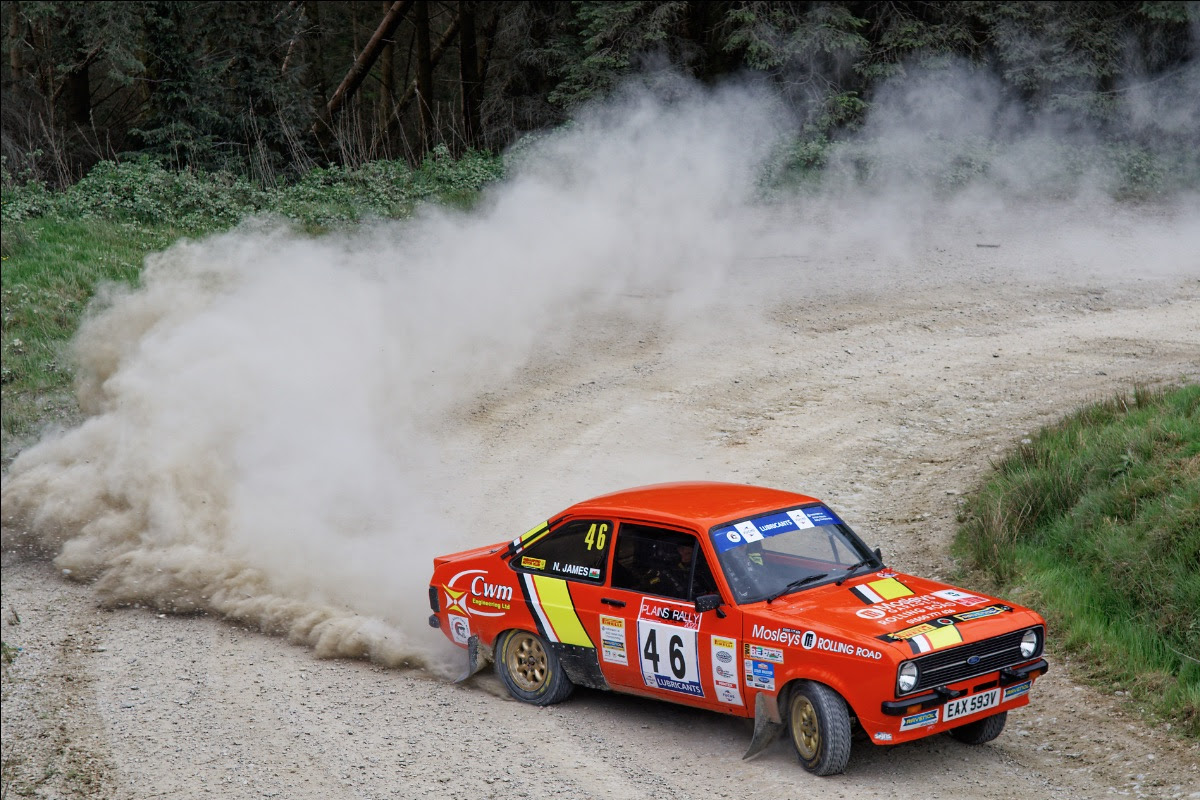 Neal James/Kevin Jones, above, made it three second place finishes in a row in the Historic W7 class and continue to lead the category in their Cwm Engineering Ford Escort. David Lloyd Roberts/Gerallt Davies have closed the gap after winning W7 - despite a misfire in their Ford Escort Mk2 on SS1, spinning the car on SS2 and going off the road on SS3. Peter Hinton/Lewis Sim came home third in class in their Escort Mk2. 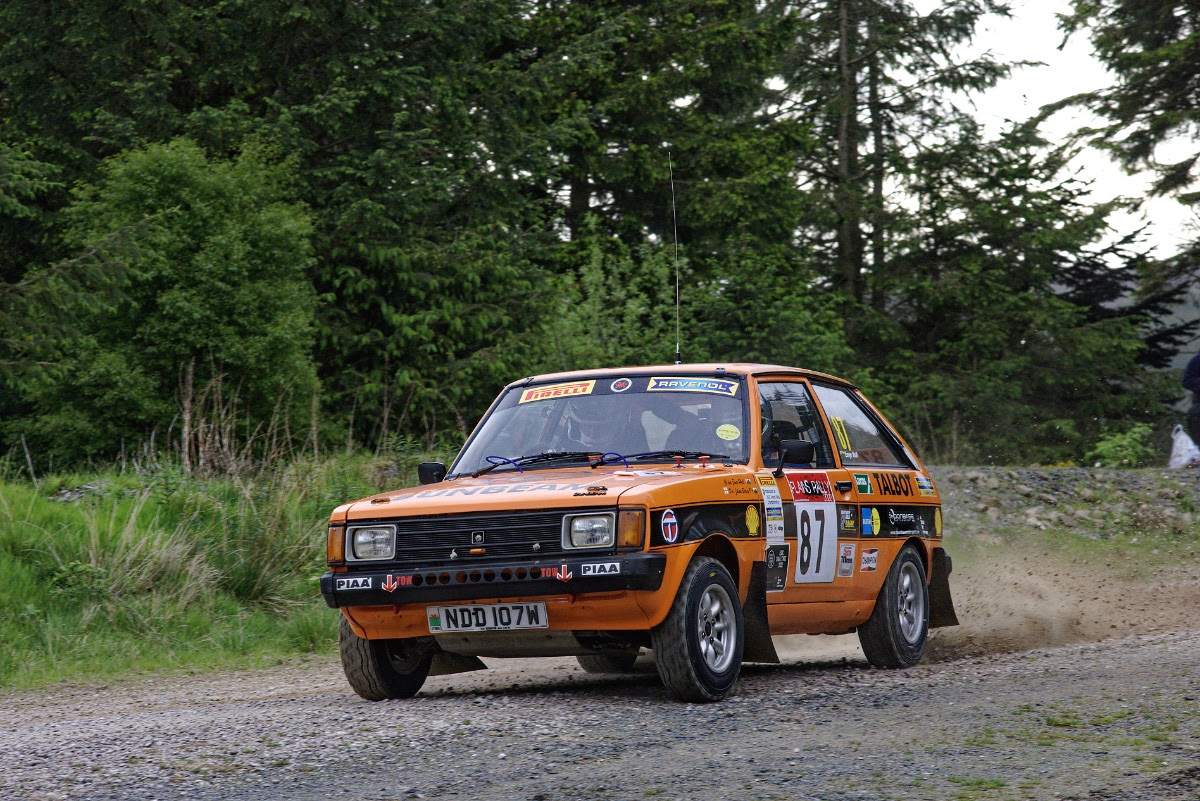 Julian Birley/Emyr Hall have retaken the lead of the Historic W6 class after taking maximum points for the second time this year in their Talbot Sunbeam Ti 1600. Mark Tugwell/Steve Pugh were hoping to close the gap on the leaders but retired their Lotus Twin Cam engines Metalways Ford Escort Mk1, as did Malcolm Bayliss/Siobhan Pugh in their 16BAO Rally Team Ford Escort Mk1. 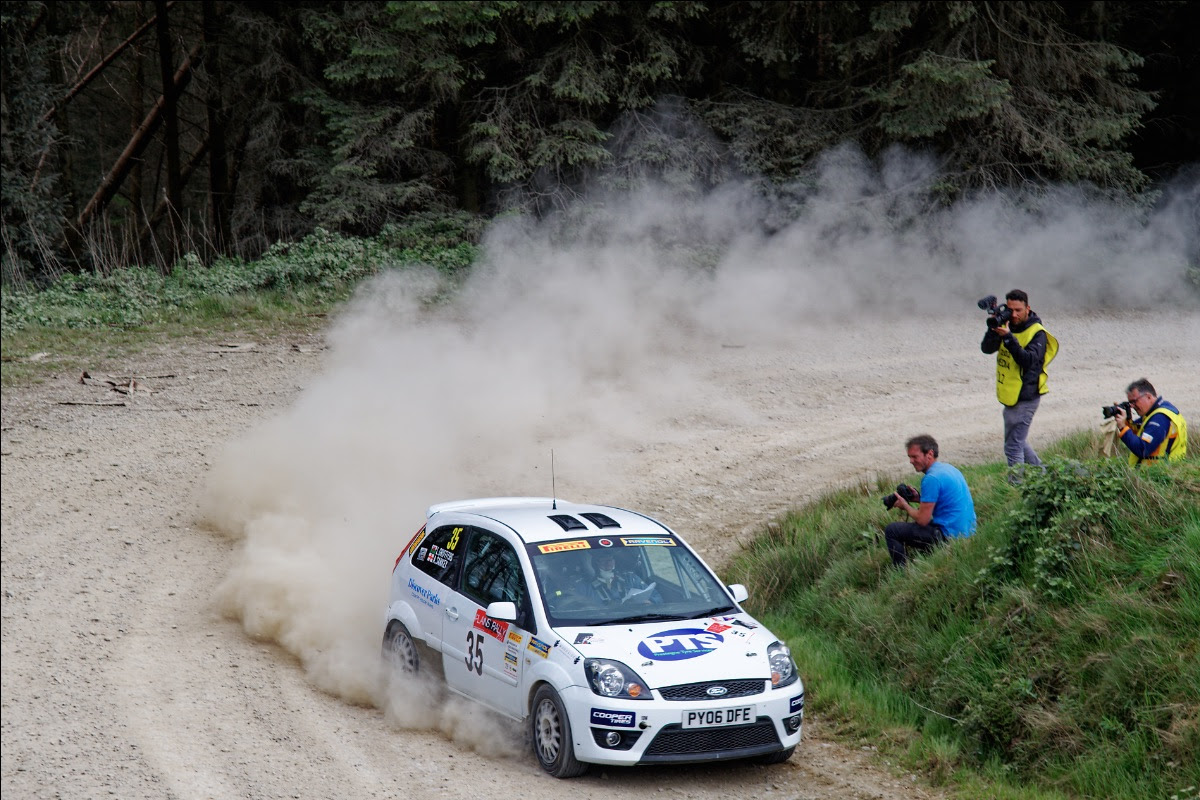 Liam Griffiths, above, has extended his lead in the OnThePaceNote.co.uk supported Welsh Junior points table to 43.5 points after he and co-driver Andrew Sankey won the category in only the driver's third event in his Discover Parks Ford Fiesta ST. Rory and Paul McCann came home second in their Metalways Hillman Avenger. 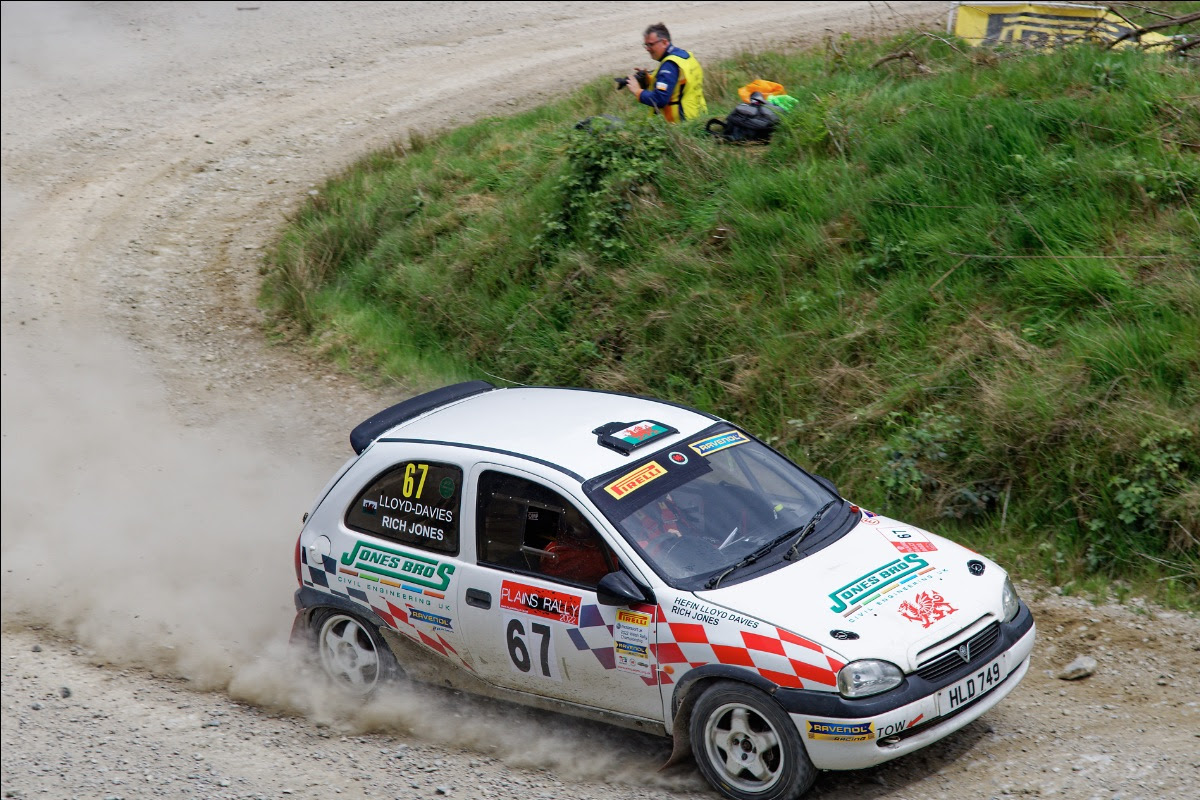 Hefin Lloyd-Davies, above, scored his second W3 victory of the season to take the class lead. This time he was co-driven by Rich Jones in his rapid Jones Bros Engineering Vauxhall Corsa. Stuart Spyer/Peter Williams finished second in their Vauxhall Corsa, while Freddy and Toby Brick retired their Opel Corsa midway through the afternoon loop of stages. 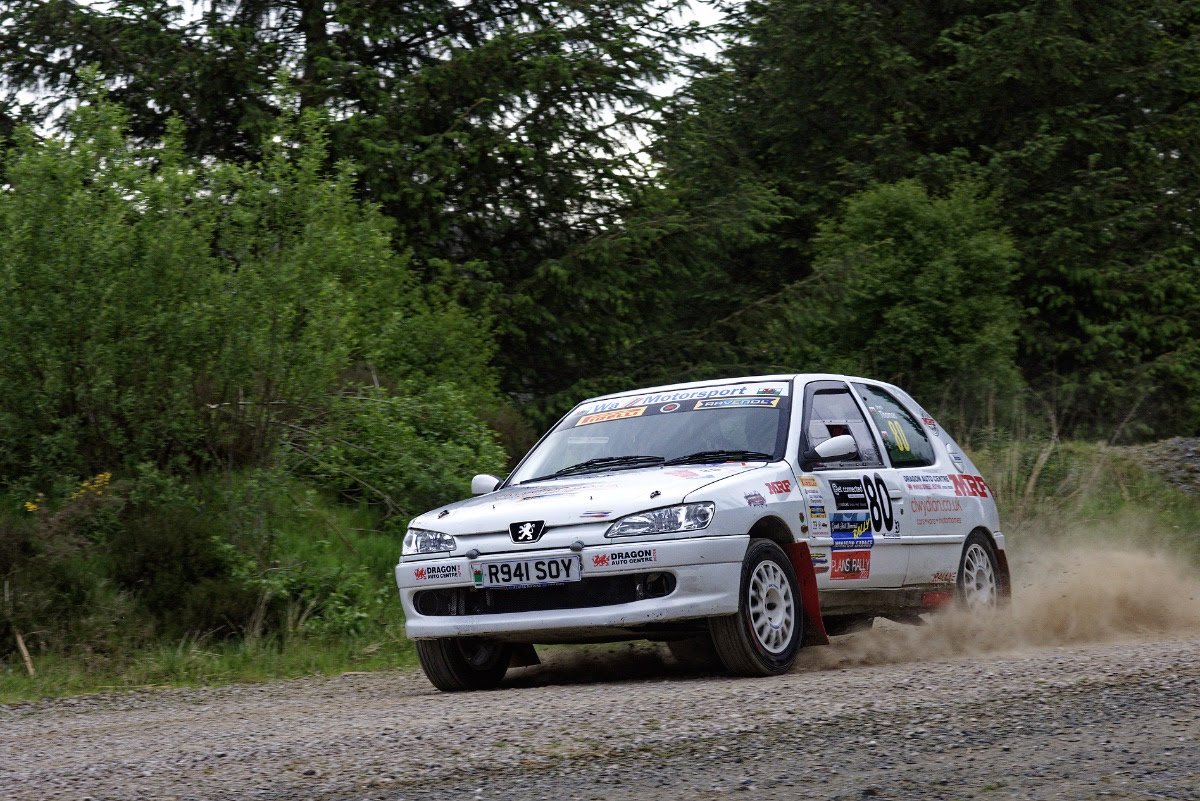 A great run on the Plains saw Brynli Thomas, pictured above score back-to-back wins and take the lead in the Road Rally class, the Peugeot 306 Rallye driver loving forestry events after many years in the lanes.

Another W10 victory, to go with their win on the Rallynuts and second on Rally North Wales, has given Martin Walters/Marie Fletcher a healthy class lead in their Honda Civic. David Forrester scored his first points of the season when he and co-driver Ian Nichols finished second in their Peugeot 205GTi.

Action streamed live from the Knutsford & District Motor Club-organised Plains Rally is available to view at facebook.com/WELSHRALLYCHAMPIONSHIP, with commentary from Howard Davies.

Round 4 of the 2022 Motorsport UK Pirelli Ravenol Welsh Rally Championship is the Builth Wells-based Nicky Grist Stages on Saturday 9 July, with stages in and around the famous Epynt military range, including the classic Crychan and Halfway forests.