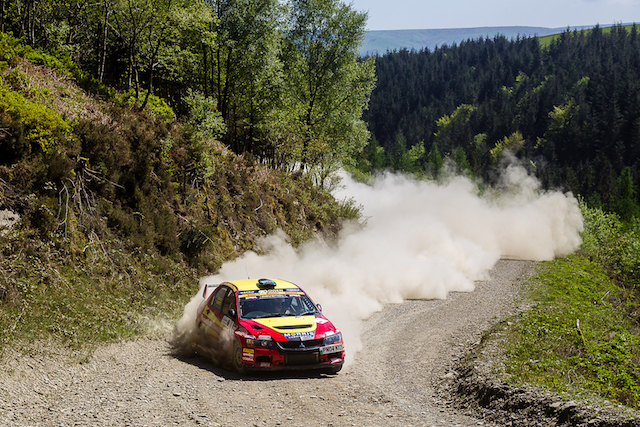 Rhuddlan driver Luke Francis secured the 2016 Pirelli MSA Welsh Forest Rally Championship on Saturday (3rd Sept) despite spectacularly crashing his car out of the penultimate round of the series, the Eventsigns Woodpecker Rally.

While his co-driver, John H Roberts from Colwyn Bay, had already clinched the overall co-drivers’ title, Luke went into the weekend’s Ludlow based event knowing that he could wrap up the drivers’ title by getting his Mitsubishi Evo IX to the end of the rally.

All hope of that ended on just the second stage of the event when the crew rolled their car, forcing them to retire. That meant that Surrey driver Wug Utting could take the Championship to the final round, November’s Wyedean Rally if he could record a high points score. At the end of the day, however, Wug just missed out and the title was Luke’s and with it a free entry on next month’s Wales Rally GB national rally, courtesy of the World Championship event’s organisers, IMS.

Maximum championship points went to local driver Shaun Gardener and co-driver Ben Innes on an event on which they have taken outright victory on two previous occasions. Second place went to Dylan Davies of Llanon with Karl Simmons from Southwell third ahead of Lampeter’s Andy Davies who took maximum Group N points.

While Luke Francis has secured the drivers’ title, five drivers retain a chance of claiming the runner up spot on the final round. Second place is currently held by Andrew Jones from Pwllheli but Utting, Dylan and Andy Davies and Flying Kiwi Boyd Kershaw all retain a chance of claiming the place at the end of the season. No fewer than seven co-drivers could still finish as runner up to John H Roberts in their championship race.

In Group N, for less modified cars, it is now down to a straight fight between Wug Utting and Andy Davies, while their co-drivers, Bob Stokoe and Max Freeman respectively, will fight it out for their Group N title.

Freeman, from Stafford also leads the co-drivers’ category in the Vital Equipment Junior Welsh Championship for competitors aged under 25. Two other co-drivers could still pass him, however, Chris Davies from Builth Wells and Mold’s Simon Jones.

Andrew Jones has clinched the Vital Equipment junior drivers’ title but any one of five drivers could still finish as runner up while Jones still has a battle on his hands with Boyd Kershaw for two wheel driver honours. The Flying Kiwi finished ahead of Jones on this event although it was Caernarfon’s Gavin Edwards who took top points in the category in his Mark II Escort along with co-driver Caron Tomlinson from Bettws y Coed.

The Woodpecker also produced a shake-up in the Ravenol Welsh Challenge standings. The Challenge, run alongside the Championship, sees points awarded according to drivers’ performances within their class. A prize fund valued at £3000 is distributed among the top 3.

Andrew Jones now leads the Challenge by six points from Luke Francis while Boyd Kershaw, Worcester’s Colin Griffiths and Hywel Davies from Machynlleth all retain a chance of finishing in the top 3.

Credit for the attached pics  given to Rallysportmedia.com

E-mail: This email address is being protected from spambots. You need JavaScript enabled to view it.