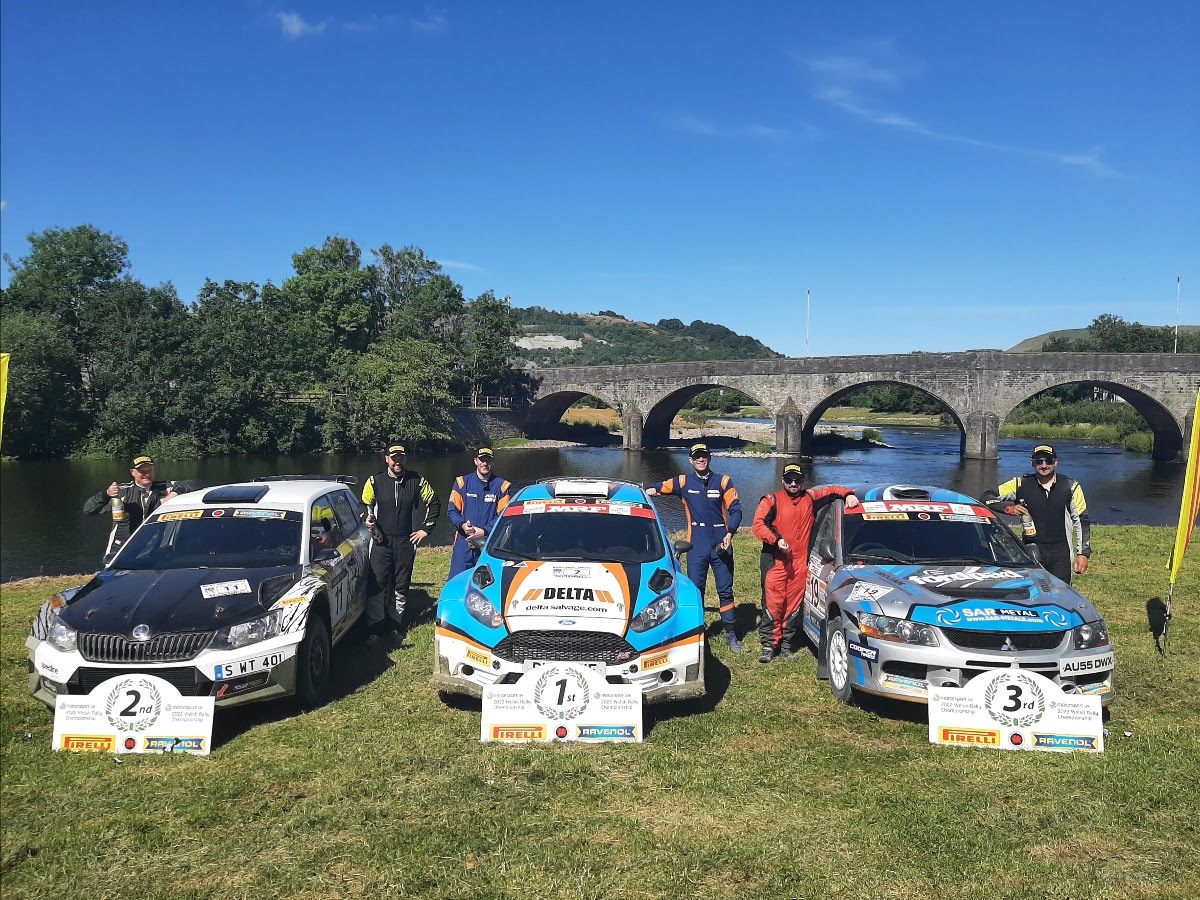 Having already won the opening three rounds of the series, Hirst and co-driver Declan Dear were once again on unbeatable form, scoring maximum points on the Builth Wells-based event in their Pirelli-shod Delta Salvage Ford Fiesta R5+.

"This is the first time that we've ever had a clean run on the Nicky Grist Stages and I'm delighted to come home with victory and maximum points. We were even able to ease off on the last stage because by then there was nothing to gain and everything to lose," said Hirst. 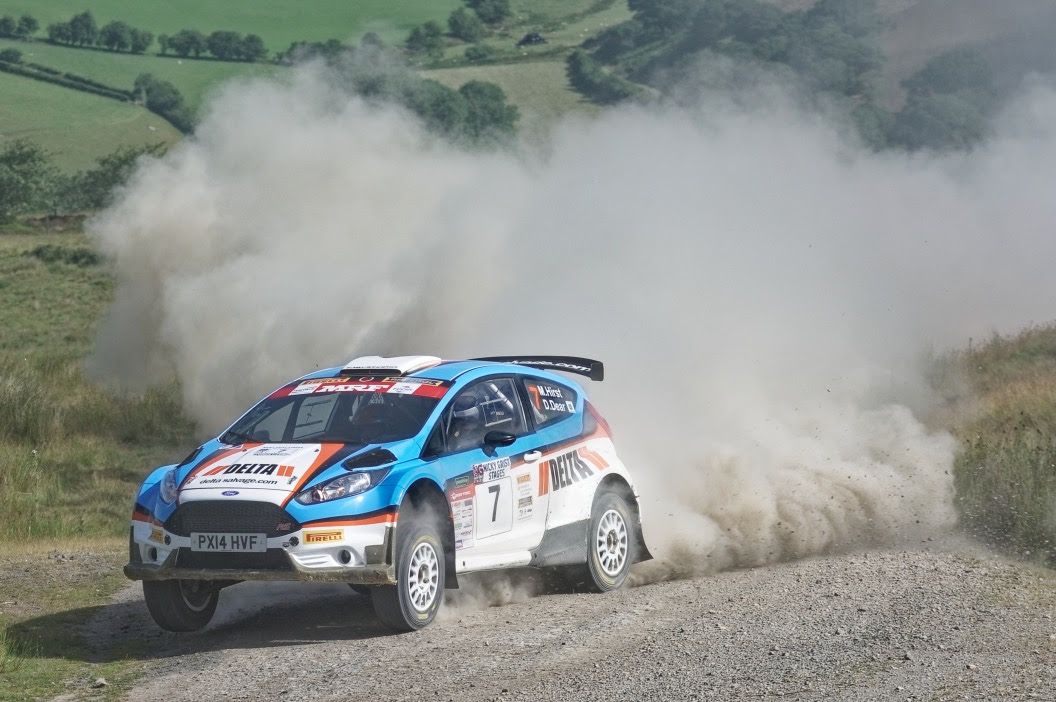 "The car has been faultless again, the team has done a great job and Dec has been spot on in the co-driver's seat - everything has been perfect.

"The Welsh Championship is looking good for us now, but it's certainly by no means over. We haven't won the title yet and we must maintain our focus if we want to bring the title home." 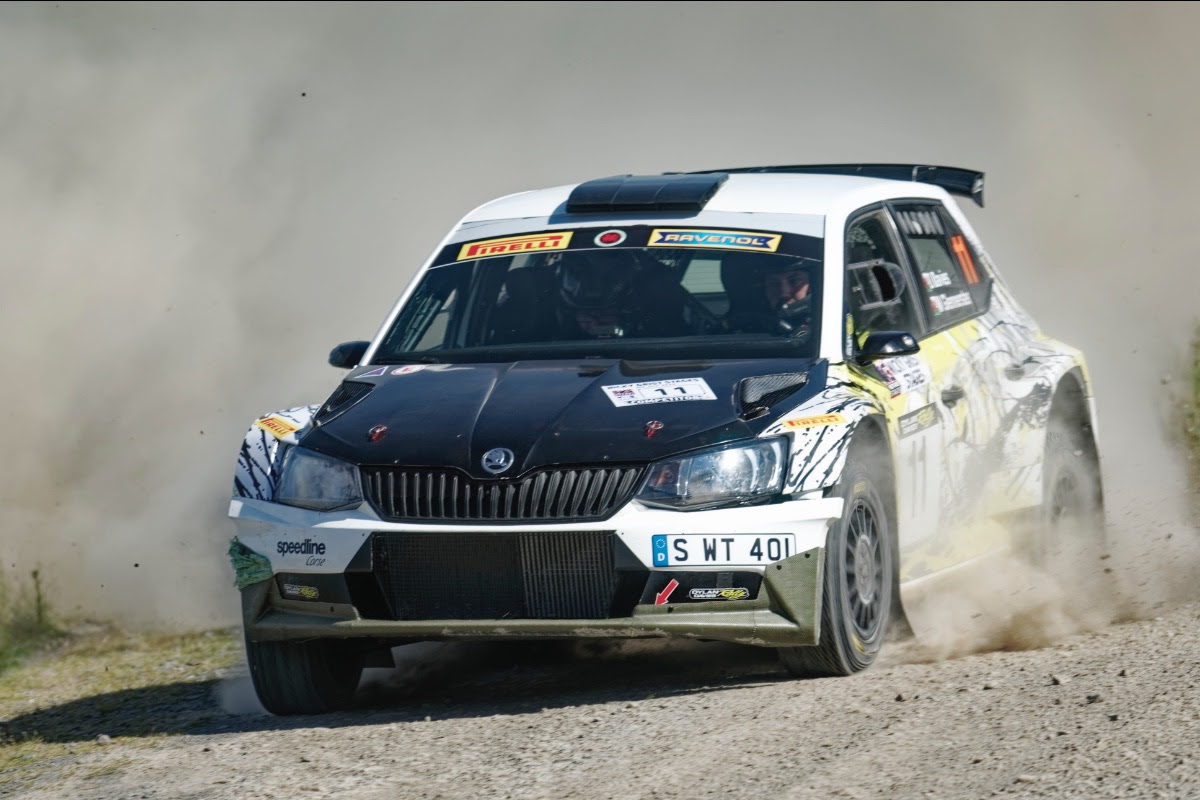 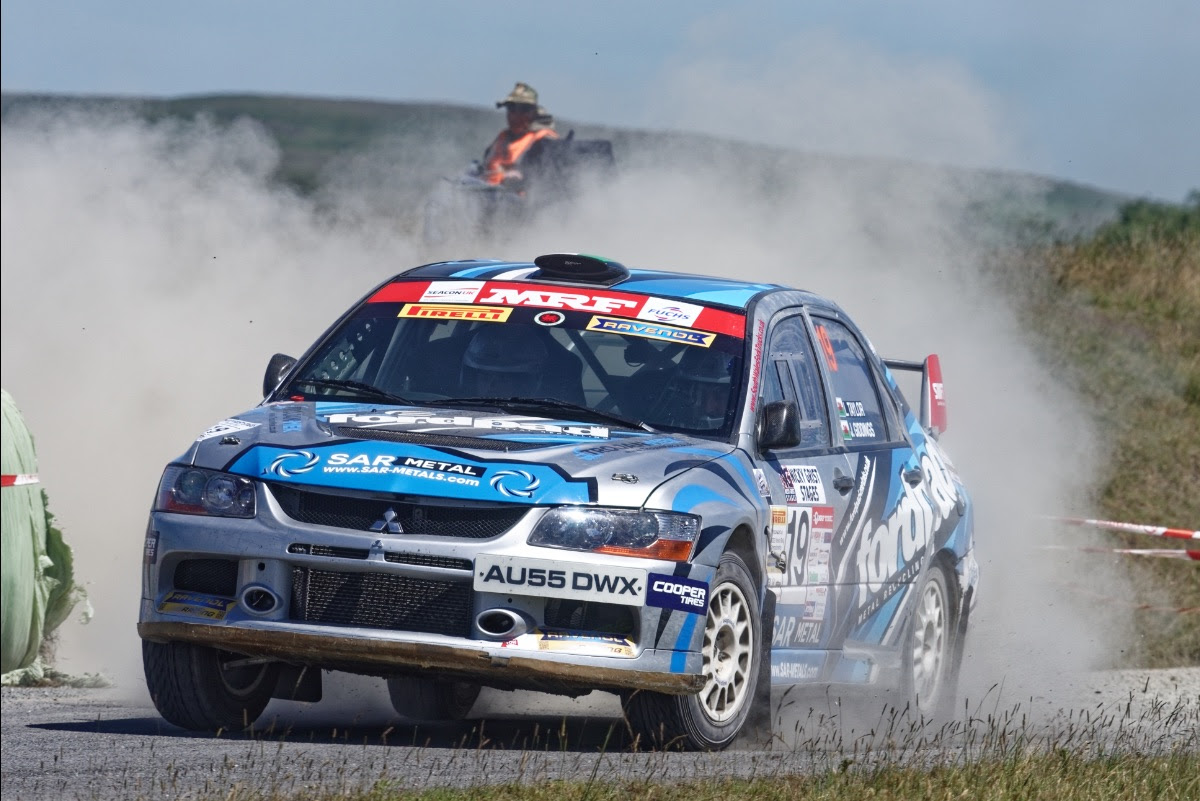 James Giddings once again finished on the podium after a great run in his Group N Fordpad Mitsubishi Evo 9. Partnered by Lee Taylor, he collected third-placed points in the overall standings and won the Ravenol Welsh Challenge category. 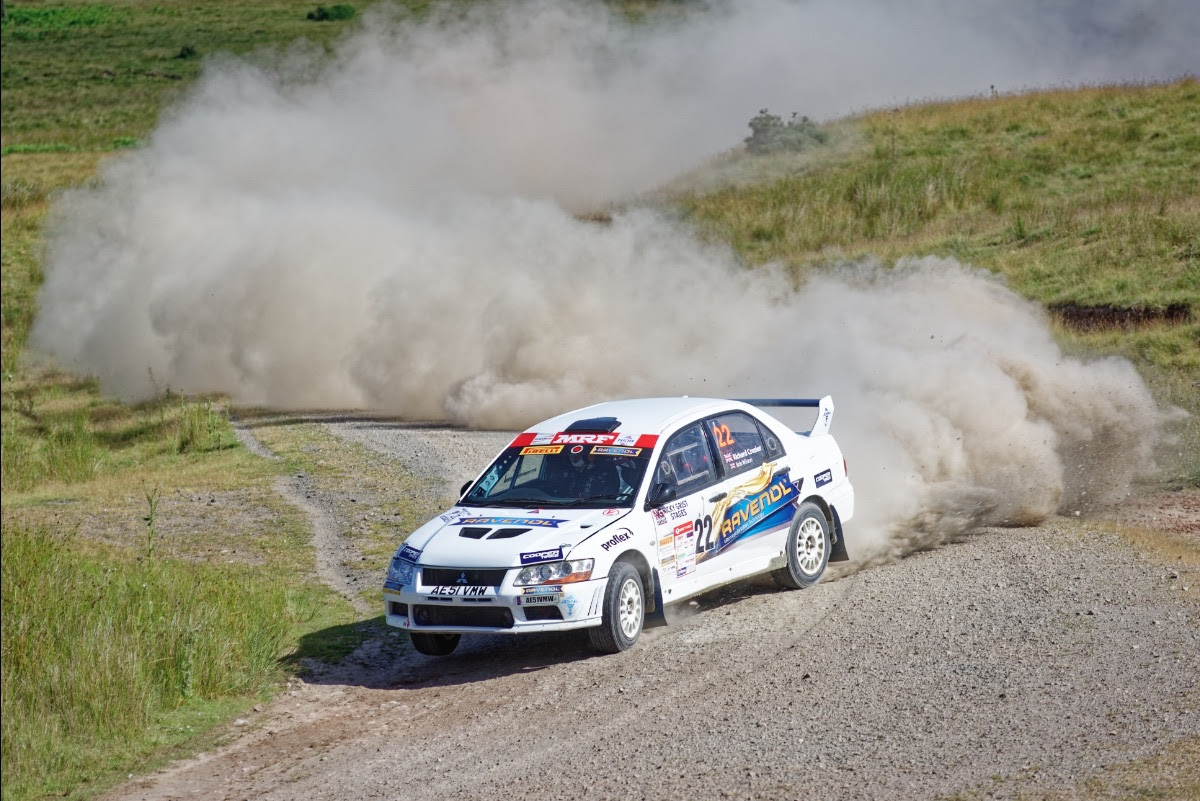 Robert Wilson was a very close fourth in his Ravenol Mitsubishi Evo 7 and for the second time this year won the OnThePaceNote.co.uk supported Welsh Junior category. Co-driven by Richard Crozier, the youngster was delighted with the result - especially as he felt that, for the first time, the car was working perfectly and he felt comfortable and confident behind the wheel. 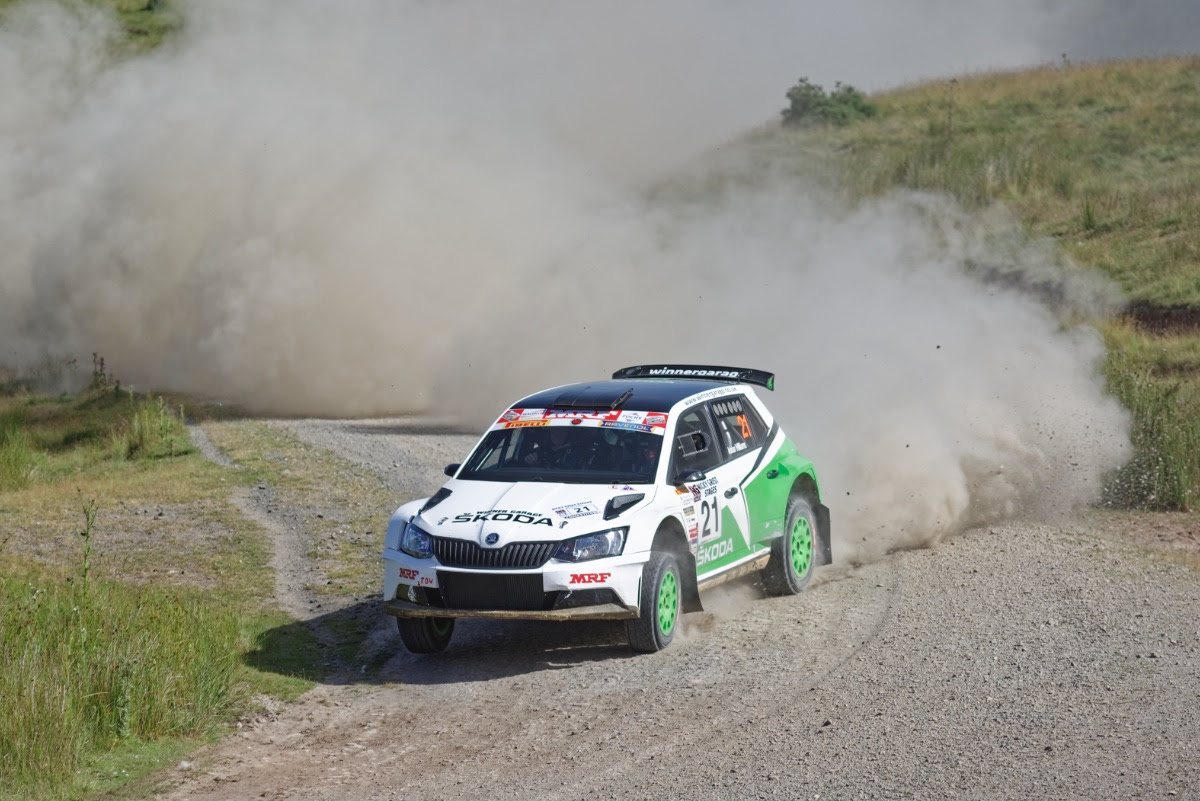 Bob Morgan/Ade Williams survived intercom failure on the first run through Monument (SS2) and an overshoot up a firebreak in Halfway (SS3) in their Winner Garage Å koda Fabia R5+. They recovered magnificently in the afternoon to score fifth-place points. Morgan moves up to second in the overall drivers' standings and continues to lead the Ravenol Welsh Challenge. 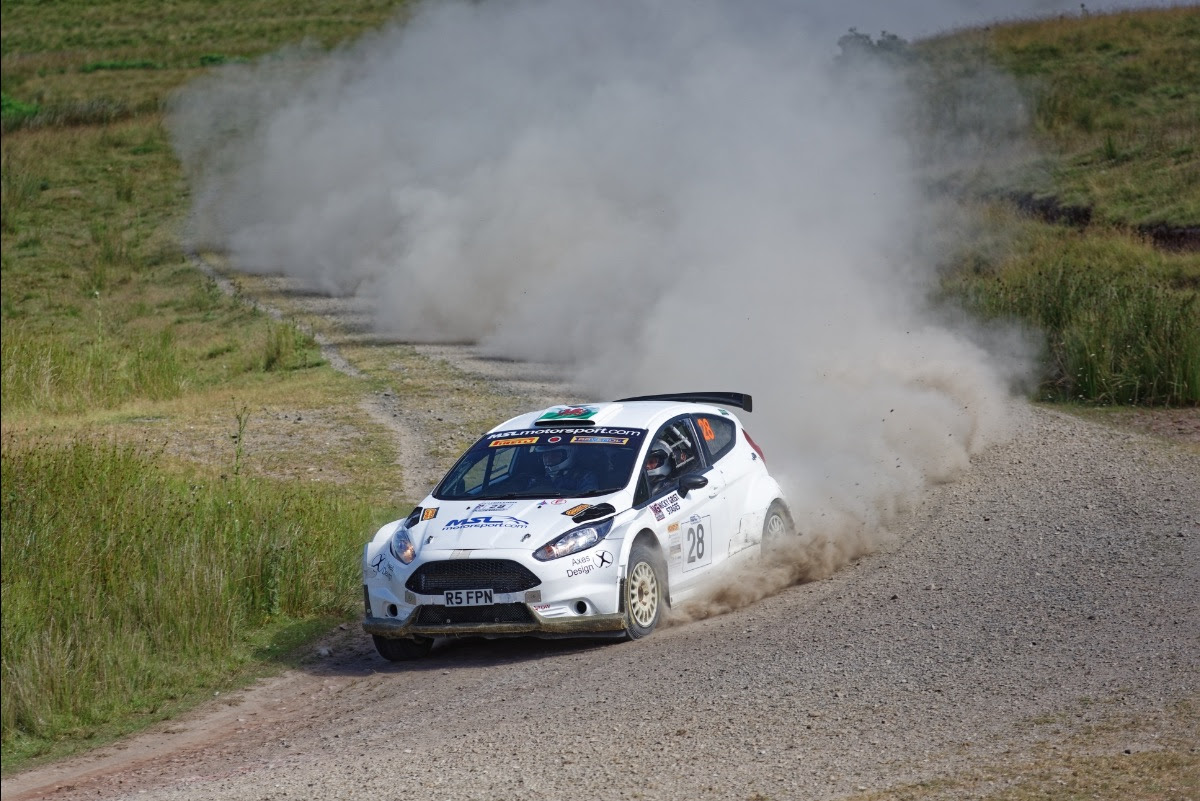 Bob Ceen lost time on the morning loop of stages when cars ahead of him rejoined the road in front of him and kicked up dust. The 2001 and 2015 Welsh champion was on great form and together with co-driver Shaun Layland took sixth-placed points.

Very close behind was his nephew Benj Ceen. He admitted to making a cautious start, but once he'd found his rhythm he and co-driver Caron Tomlinson set some impressive stage times in their MSL-prepared Ford Fiesta R5.

John Caine continues to practice what he teaches as he picked up eighth-place points in his Phil Price Rally School-backed Subaru Impreza, ably guided through the classic mid-Wales forests on and around the Epynt military range by Andrew Sankey.

Wug Utting/Bob Stokoe scored their best result of the season in their Geoff Jones Motorsport-prepared Subaru Impreza N12b, despite the car bottoming out in the morning, while Paul Walker, pictured below, continues to lead class W13 after he and co-driver Geraint Thomas recorded a Welsh top 10 finish in their Green Paw Subaru Impreza. 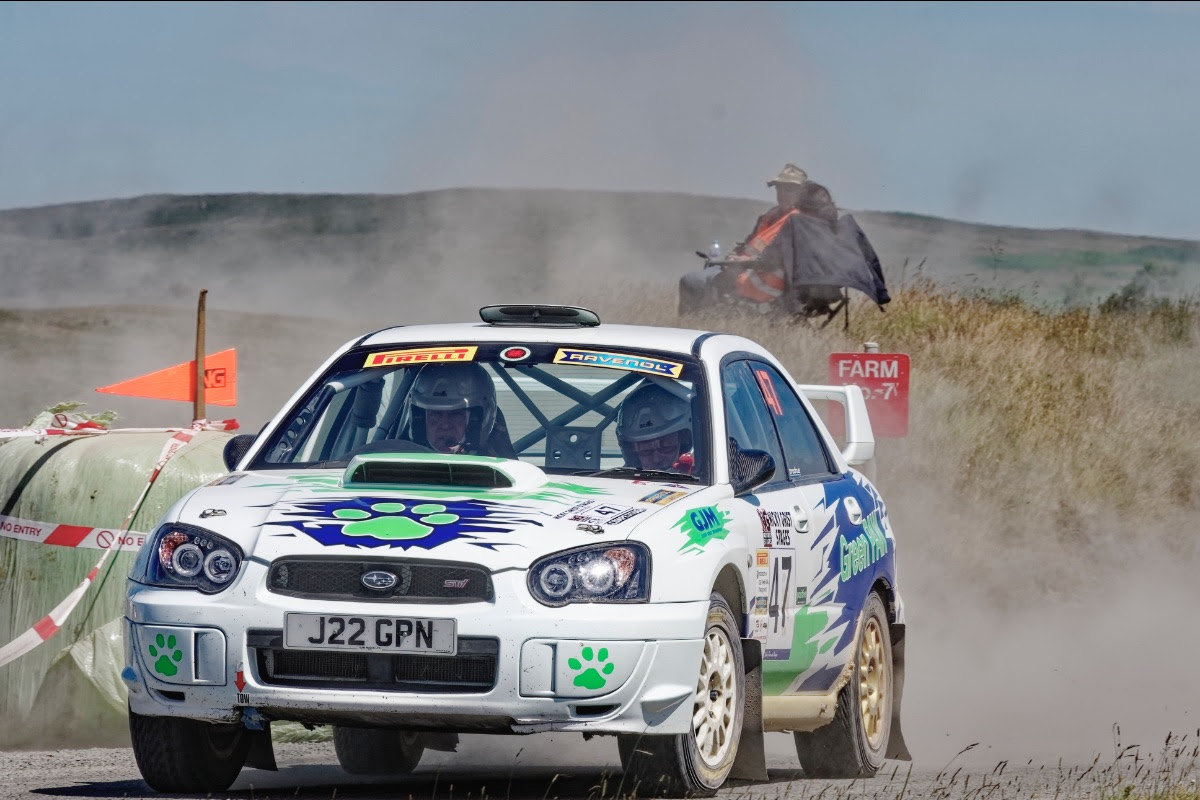 An off in Monument (SS2) may well have cost Simon Rogers/James How a place in the Welsh top 10, although they did bring their Mitsubishi Evo 6 home for a good result.

Perry Gardener/Jack Bowen rolled their Ford Fiesta R5+ out of the event in Halfway (SS3), while Nik Elsmore/Stephen McAuley were forced out with head gasket failure in their Mitsubishi Evo IX 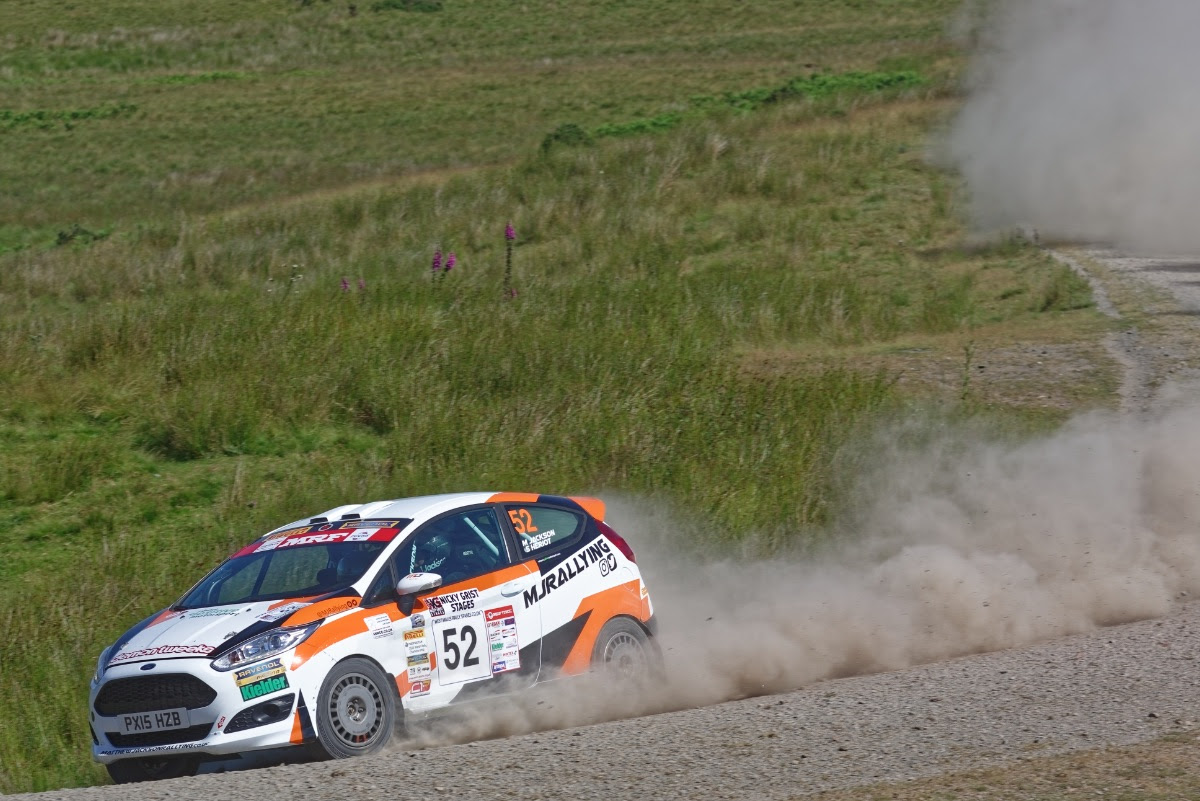 Matthew Jackson/Sasha Heriot look unstoppable in class W4 and have also taken the lead in the Welsh 2WD category in their MJ Rallying Ford Fiesta R2T. After a magnificent morning the car didn't feel right in the afternoon and eventually the turbo pipe clips sheared halfway through the last stage, resulting in a near two-minute time loss. That dropped them to fourth in W4, but after three wins they still lead the class - and after four consistently high scores are ahead of all the non-historic Escorts, BMWs, Peugeots and other Fiestas in the highly competitive 2WD section. 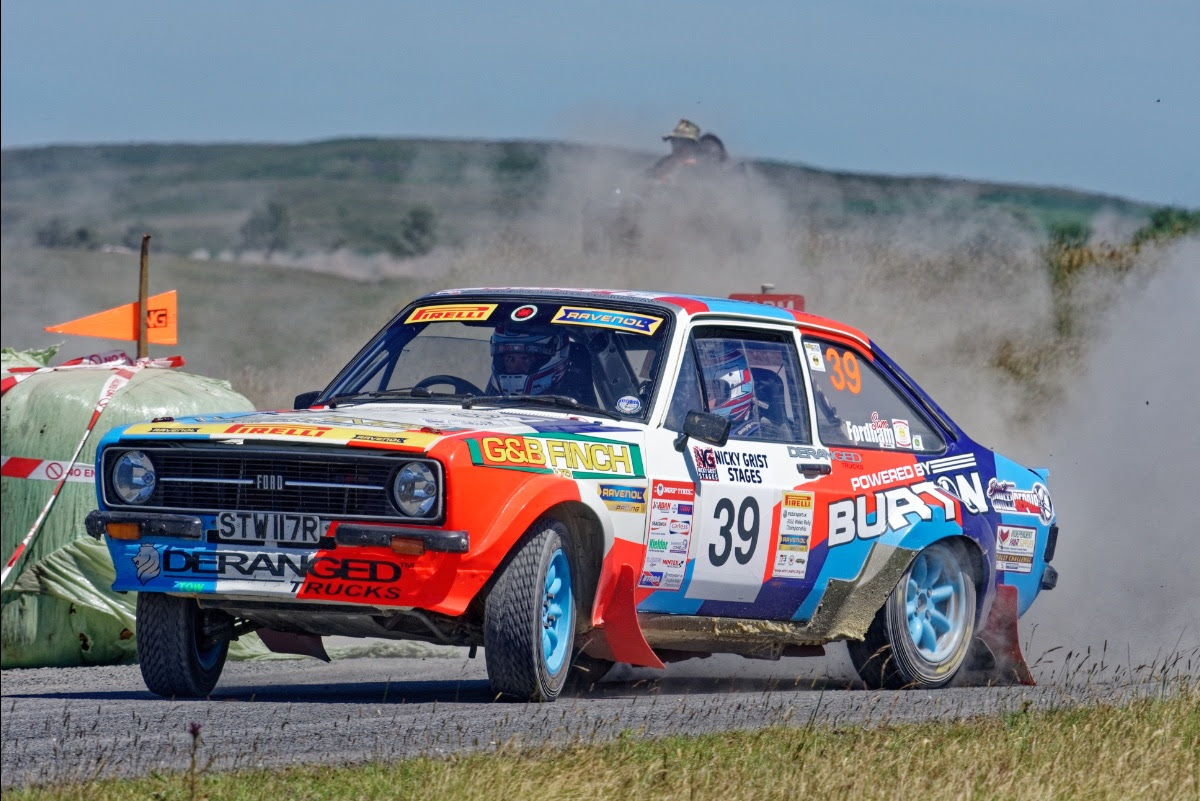 Boyd Kershaw had led the Welsh 2WD class, but his Flying Kiwi Escort Mk2's engine cut out after Llyn Login (SS1) and refused to start - temporarily stranding him and co-driver Keegan Rees up on the Epynt range.

Kevin Metcalfe retired his 3-litre BMW E30 on SS3 when a broken half-shaft stranded him and co-driver Ian Jones, while Lewers Firth/Shaun Lapper swapped their Firth Construction Subaru Impreza for a BMW E36 M3 but failed to complete the morning's loop of stages. 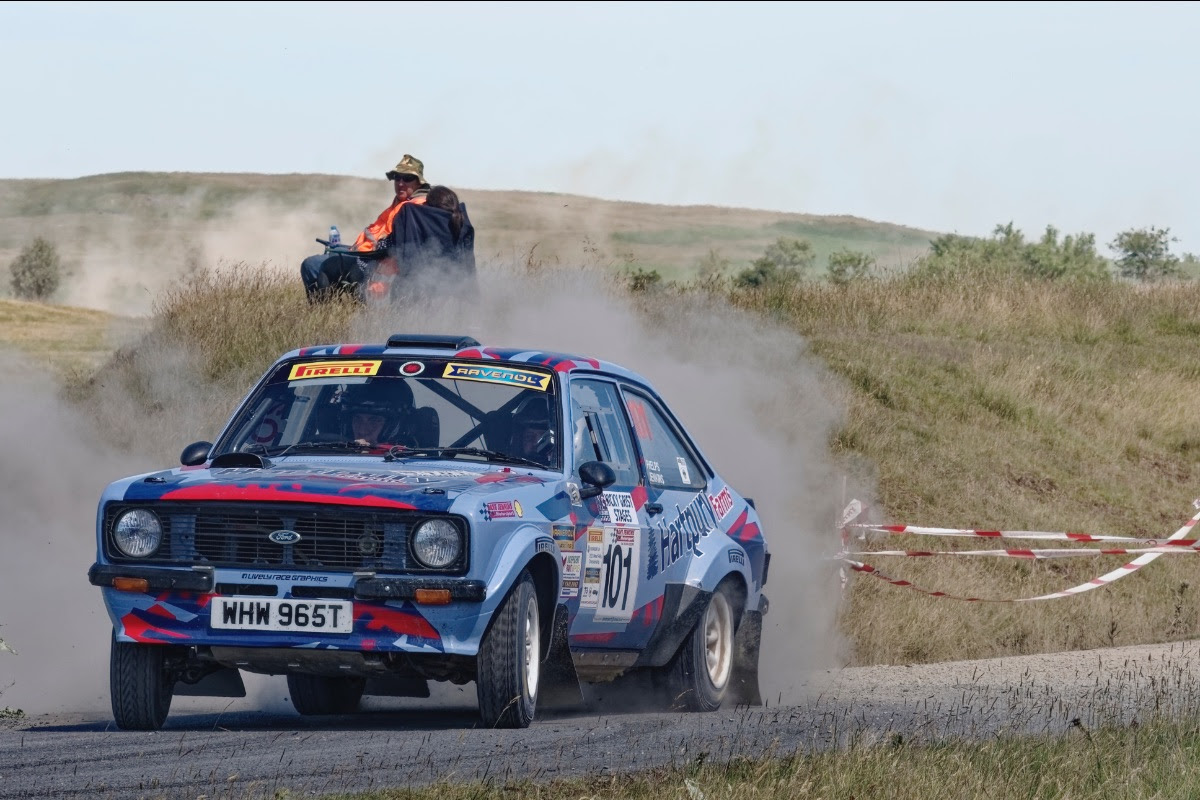 Geoffrey Phelps/Colin Jenkins had a brilliant run to win class W11 in their Hartpury Farms Escort Mk2. With leader Kershaw finishing down the order, Philip Jones/Ryan Griffiths have closed the gap to just three points in their Ford Escort. 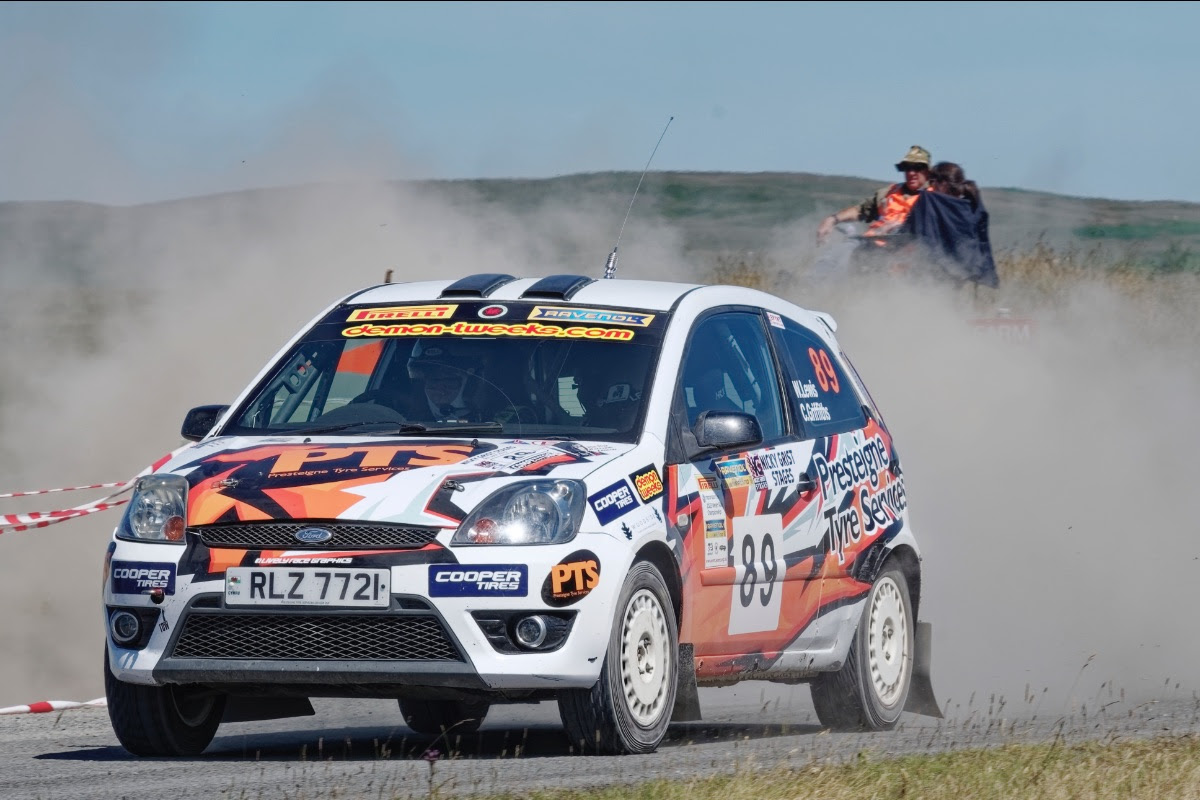 Nick Elliott has closed the gap at the top of the Historic class W8 after he and co-driver Dave Price finished second in their Fiat Abarth 131. They lost time when they hit a rock in Halfway (SS3) and bent the rear axle, meaning that the car was crabbing through Crychan (SS4), which was the longest stage of the event.

They were defeated on this occasion by a flying Michael McDaid/Declan Casey who won class W8 in their McDaid Pharmacy Escort RS1800 Mk2.

Robert Gough/Sam Collis feared their rally was over after hitting a rock in Halfway (SS3) but survived to bring their Ford Escort RS1800 Mk2 home third in class W8.

Defending class W8 champions Paul Street/Ian Jones had an eventful rally which began by overshooting a corner on SS2 and heading down an escape road in their PJS Marine Escort RS1800 Mk2. The car got stuck in fourth gear on SS4 and Street had to use both hands to free it - and finished Crychan on the rev-limiter in third gear, rather than risk engaging fourth again. The gearbox was changed in the one-hour midday service and a good points-scoring finish places them third in class. 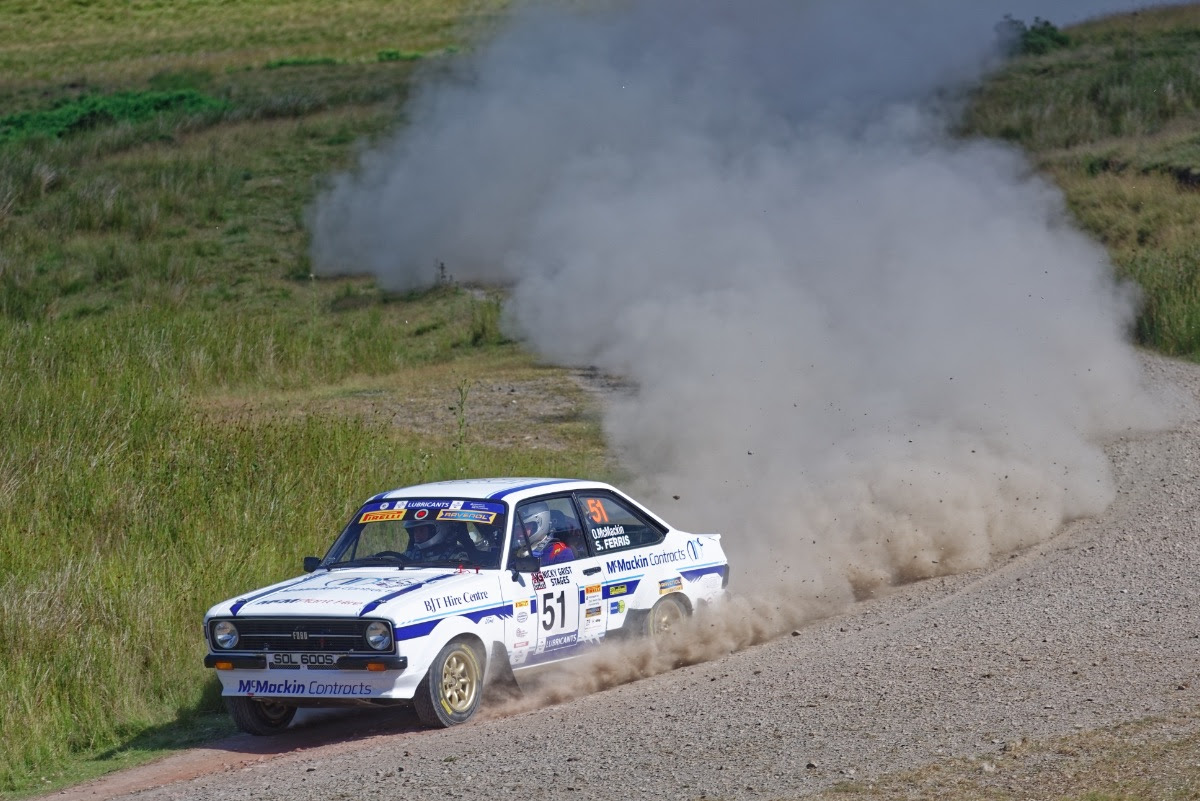 Neal James/Kevin Jones continue to lead the Historic class W7 class after another great drive in their Cwm Engineering Ford Escort Mk2, while David Lloyd Roberts/Gerallt Davies won the class on the day in their Escort Mk2. 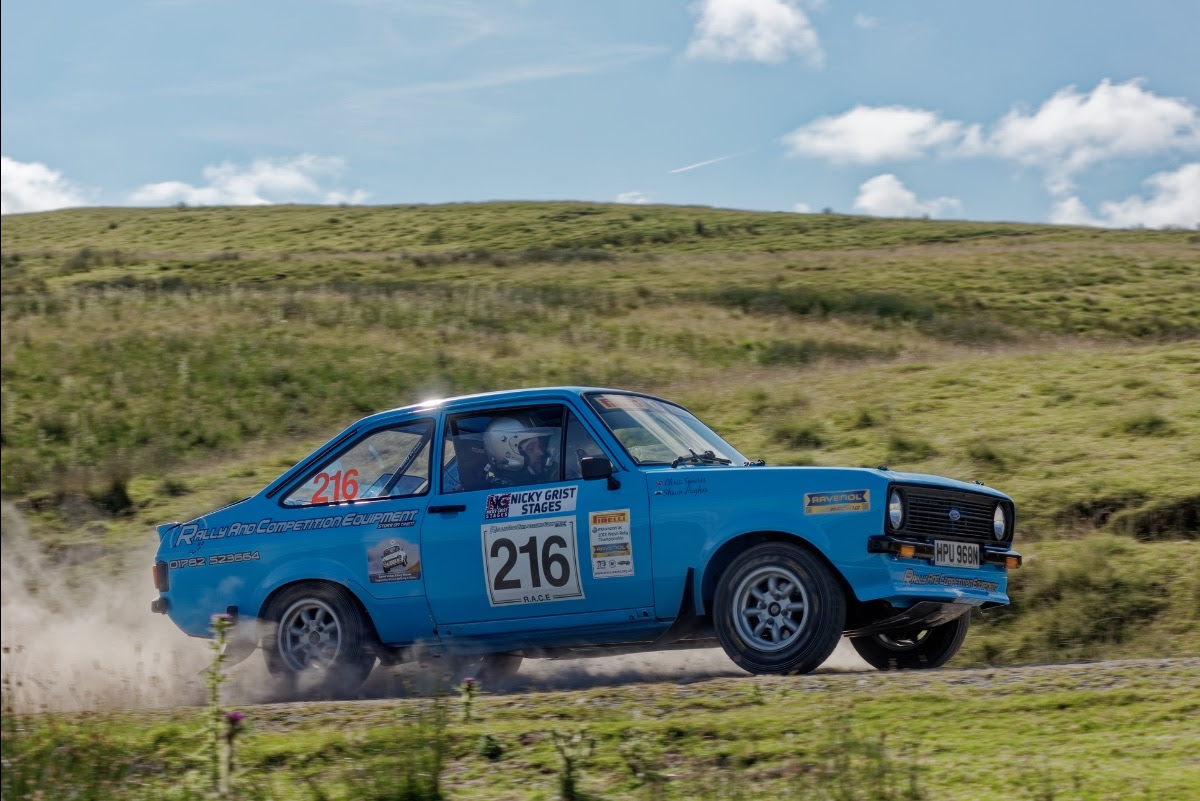 Having won the Historic class W6 on their gravel rally debut, Chris Squires/Shaun Hughes did it again on only their second forestry event in their Trevor Morris Engines Ford Escort Mk2. Julian Birley/Emyr Hall still lead class W6 class, despite retiring their Talbot Sunbeam Ti 1600 after the penultimate stage with a broken strut. Just two points separate the crews at the top of the W6 table. 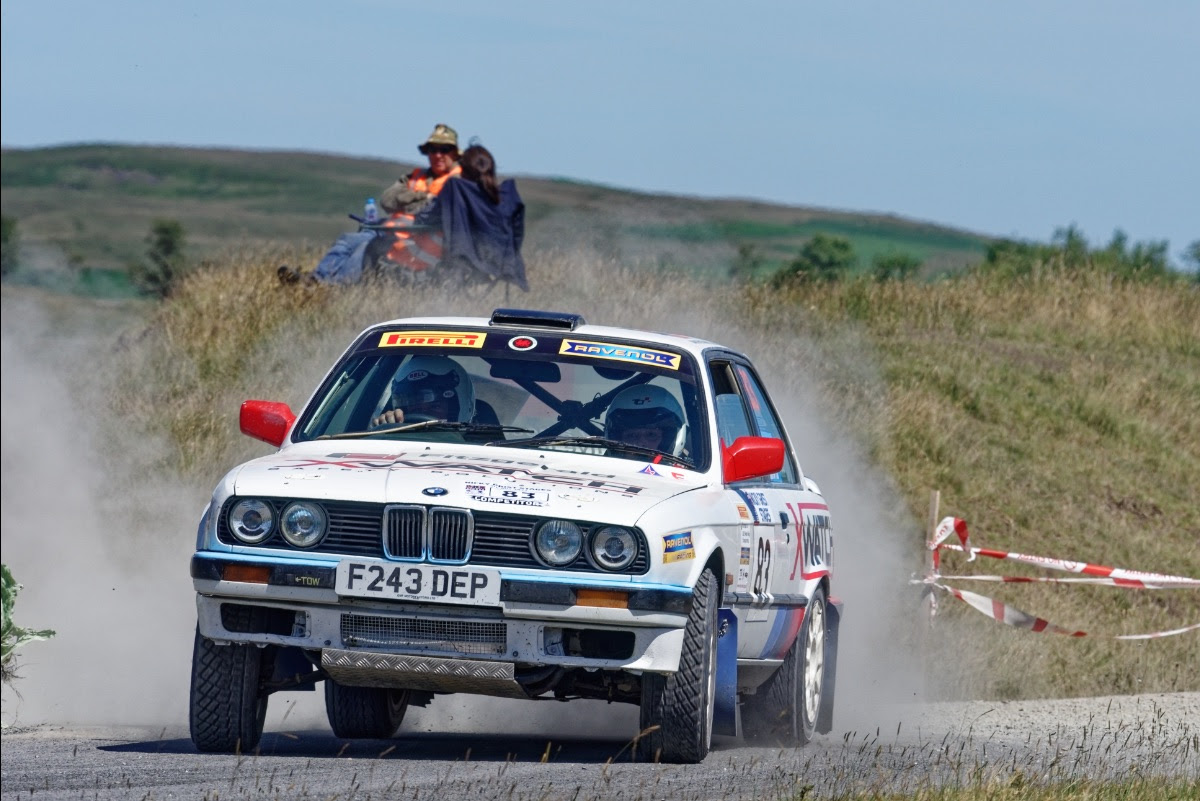 The battle is heating up in the David Stokes Historic Challenge award for drivers and the Guy Weaver award for co-drivers. Those who finish in the top three of each historic class (W6,W7 and W8) at the end of the season will be put forward for the prestigious awards. 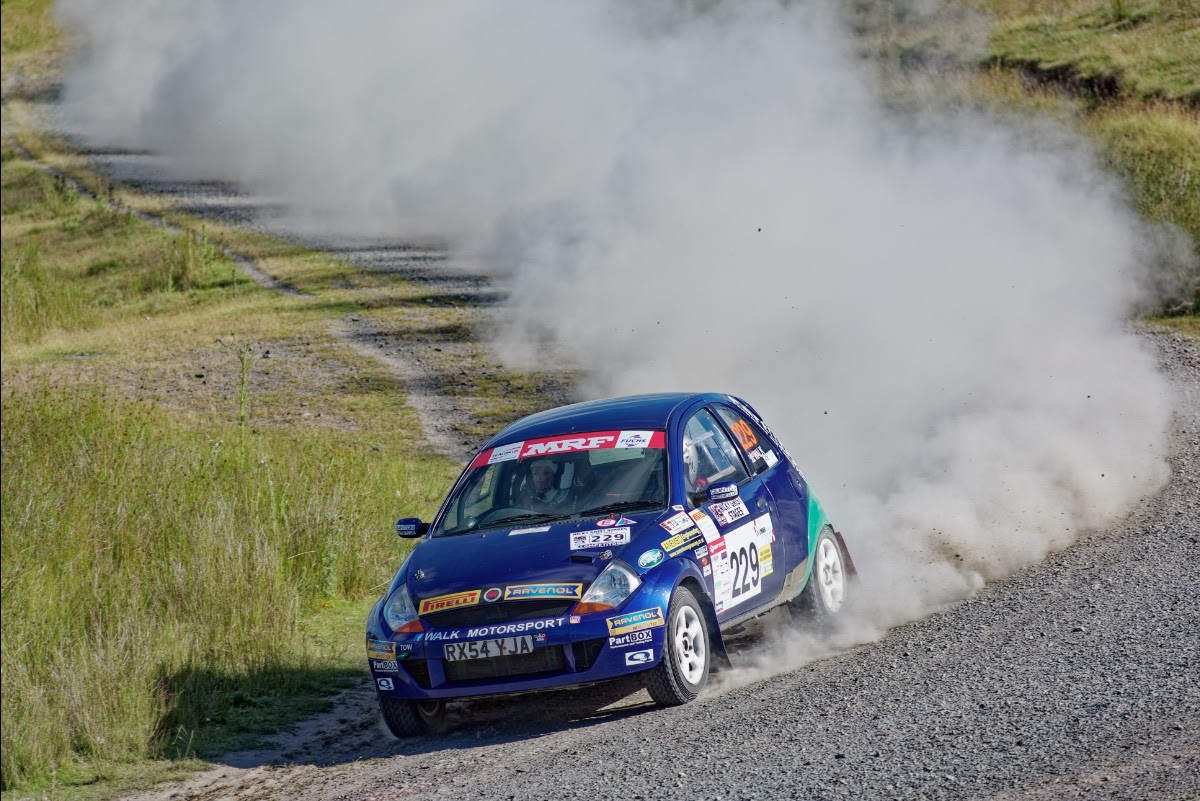 James Dunkley has taken the class W2 lead after he and co-driver Dan Sayce put in a great performance in their Opel Corsa, while Adrian and Matthew Walk, pictured above, have closed the gap at the top of class W3 after a great victory in their PartBOX Ford Ka, despite an overheating issue on the last stage. 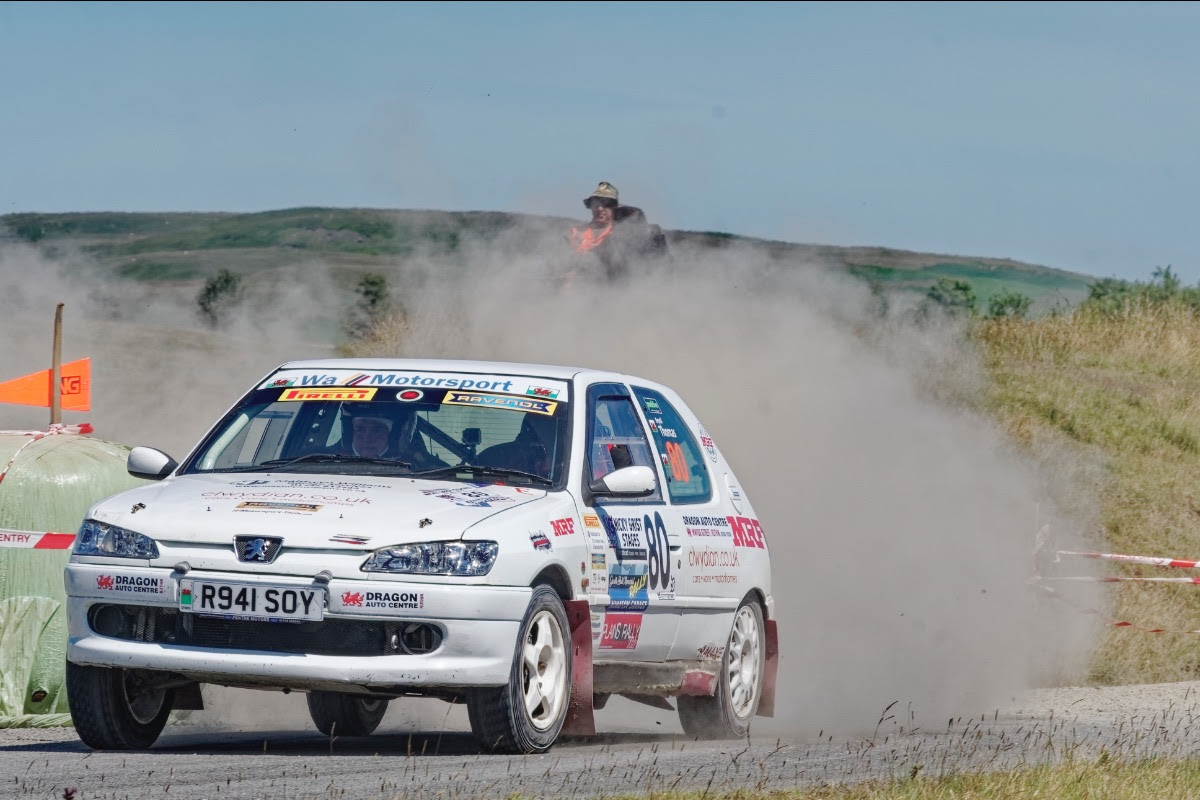 One of the closest battles of the day came in the Road Rally class, where Brynli Thomas/Sion Rowlands (Peugeot 306 Rallye) beat Graham Thatcher/Tim Samuel (Pembridge Vehicle Management Peugeot 206 GTi) by just 1.3 seconds! It was Thomas' third class win in a row, as he extends his lead.

Martin Walters/Marie Fletcher are celebrating their third class W10 win in a row in their Honda Civic, which puts them in prime position for the title.

The Nicky Grist Stages was live-streamed, with action from the stages and driver and co-driver interviews with Howard Davies coming from the service park. All the footage can be viewed at leisure on: facebook.com/WELSHRALLYCHAMPIONSHIP.

The next round of the 2022 Motorsport UK Pirelli Ravenol Welsh Rally Championship is the Phil Price Memorial Woodpecker Stages on Saturday 3 September, which is supported by Presteigne Tyres and the Phil Price Rally School.