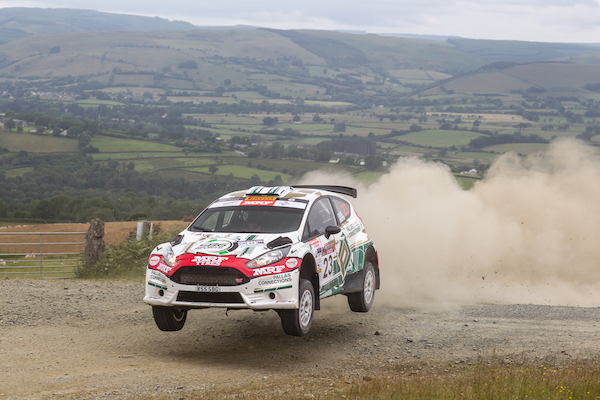 Callum Black and co-driver Jack Morton took victory on the opening round of the 2021 Motorsport UK Pirelli Welsh National Rally Championship, the Nicky Grist Stages, winning the Interclub Rally section of the event and finishing an incredible seventh overall in their Ford Fiesta R5.

In his first rally outing for almost two years, and his first in an R5 car for three and a half years, Callum, the 2017 Pirelli Welsh National Rally champion, drove brilliantly to score maximum points on the 44 stage mile event, held on the classic mid-Wales forest stages of Llyn Login, Monument, Halfway and Crychan.

Despite a handling problem in the morning, caused by a broken anti-roll bar, and a spin on SS2, the 586 Sports team driver finished 21 seconds ahead of Ian Bainbridge/Will Atkins, who were delighted with the set-up changes they’d made to their Škoda Fabia R5 during lockdown. Ian was a lot faster in the afternoon, when all four stages were repeated – a full 20 seconds faster through Crychan the second time in fact.

Third place went to George Lepley/Tom Woodburn in their AMS-tuned Mitsubishi Evo X. After a very good start, they found the afternoon loop was much more challenging, but did well to stay in touch with the R5 cars. They were also top Welsh Junior crew home – Lepley staking first claim to the top end-of-season prize of a test in a PCRS Rallysport-prepared Hyundai i20 R5, courtesy of OnThePaceNote. 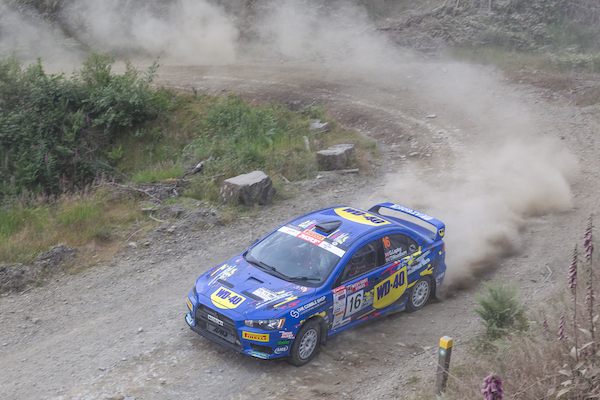 It’s the same Junior prize that Tom Llewellin won in 2019, and the former Welsh Junior champion appeared this time in a Mitsubishi Mirage. Together with co-driver Ross Whittock, he made a fantastic four-wheel drive competition debut, and never put a foot wrong as he got valuable miles under his belt on his way to fourth.

2019 Pirelli Welsh National Rally champions Matthew Hirst/Declan Dear had a nightmare of an opening loop, with an engine misfire on SS1 and 2 and a broken driveshaft on SS3 and 4 in their Mitsubishi Evo IX. Despite this, they showed their class with a brilliant recovery in the afternoon, which rewarded them with 11th at the finish.

Also struggling was the 2019 championship runner-up Russ Thompson, who snapped a pair of driveshafts on his Mitsubishi Evo IX upon landing after a jump on SS2. Having missed two stages, he completed the afternoon’s loop of stages – both for testing and to get seat time with new co-driver Peredur Davies.

Andy Davies/Ian Beamond were having a good run before a TCA broke on their Subaru Impreza.

Bob Morgan’s first rally for three years was hampered a little with his super-smart and self-prepared Škoda Fabia struggling to launch off the start lines. Co-driven by Adrian Williams, the Winner Garage boss was to retire in the afternoon with brake problems.

Wug Utting was sporting a new hip, having had a replacement operation only a month ago. He and co-driver Bob Stokoe were on fine form in their Subaru Impreza STi N12, completing the event without drama. It was also a good debut for Martyn and Dawn England, who, after many years in their Ford Fiesta R5+, had purchased a Mitsubishi Evo X just four days before the event. And they got to the finish without an issue.

It was also great to see Nik Elsmore return to the sport, having only contested three rallies in the last 12 years! On his first event since the 2015 Wyedean Stages Rally, he and co-driver Craig Drew were quickly back up to speed in a Mitsubishi Evo IX, getting used to a sequential gearbox and route notes after a long time away. Elsmore joked that, “it’s a good opportunity to blow plenty of cobwebs away, although the event doesn’t have much faith in us, seeding us at ninety-one.” And he was correct, for he was a second per mile quicker through the stages in the afternoon and came home ninth registered Pirelli Welsh National Rally Championship contender. 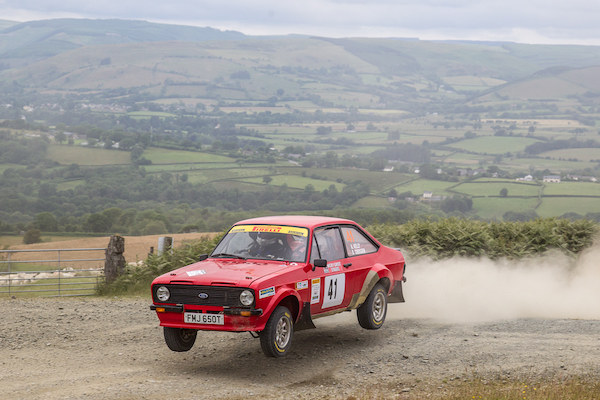 David Crossen won the Restruct-sponsored Two-Wheel Drive category, the Irishman finishing eighth with Aileen Kelly on the notes in an Escort Mk2.

Paul Barrett/Gordon Noble were almost a minute behind in their Escort Mk2 – but were nonetheless overjoyed to win the hotly contested Historic class.

Frank Kelly, co-driven by his daughter Lauren, had a tyre come off the rim on SS2 – but their afternoon was a lot better as they came home third 2WD in their famous Baby Blue Escort Mk2. Owen McMackin/Lee Taylor and Ashley Davies/Sam Fordham finished fourth and fifth in the 2WD section in their Escort Mk2s.

Having very kindly donated 500 packets of fabulously moreish Brace’s Welsh Cakes for all the volunteer marshals, Jonathan Brace had a good start to the event – despite picking up a puncture in SS2. Sadly for him and co-driver Paul Spooner, his immaculate Escort Mk2’s engine cut out a mile into the final stage and refused to restart.

Ben Friend/Cliff Simmons also had high hopes of a good result, but their run ended after their Escort Mk2 broke its differential on landing after a crossroads junction.

Gary Smith/Clive Jones won the private RS1600 Mk1 battle, beating Andrew Stokes/Jonny ‘Tad’ Evans and David Kirby/Martin Corbett. They might have been seeded in the 200s, but you’d be hard pressed to find a more competitive group of drivers – and that battle is set to rage all season.

Also enjoying themselves were Julian Birley/Steve White. They won the RallySport championship 40 years ago in a Talbot Sunbeam Ti, and have returned this year in a 1600cc Sunbeam – having rebuilt the engine, gearbox and rear axle during lockdown. Their preparation efforts paid off, as they recorded a trouble-free W6 class win.

Ioan Lloyd/Sion Williams enjoyed a fantastic run in their Peugeot 208 R2, a spin on SS2 not getting in the way of a well-earned W4 class victory. Jonathan Jones/Alan Walker were second in their Fiesta R2, while Charlie Todd/Glyn Thomas completed the top three Welsh Juniors in their Fiesta R2T. Jonathan Lee Jones/Lewis Griffiths gently rolled their Fiesta R2T in Halfway, but sadly a holed radiator meant that they could go no further.

“It’s been three and a half years since I last drove an R5 car and almost two years since I’ve done a rally, so it’s been a very enjoyable event and I’m delighted with the result,” said Callum Black.

“It was good to just be back in a rally car – and I was surprised to be right up there and leading the very strong Welsh National Rally Championship section after stage one. Between stage one and two, I noticed that the anti-roll bar had snapped, so I had to disconnect it on the road section. The stability was compromised and the car was trying to get away from me on the faster sections after that, so stages two, three and four were a bit of a challenge.

“The team fixed the car at midday service and after giving it a good go on the first two stages in the afternoon, we decided to bring the car home safely and get through the last two stages without any heroics and take home maximum championship points. I’m very happy with the result and I’m already looking forward to the next event.”

While the Nicky Grist Stages was a non-spectator event, fans could watch live streaming with Howard Davies and Eifion Jones interviewing crews from strategic points along the route. Sideways Media was there to film the action, and it is producing a 30 minute programme dedicated to the Pirelli Welsh National Rally Championship, which will be uploaded onto social media channels as early as possible.

After a 518-day enforced break caused by the Covid-19 pandemic, it truly was a fantastic opening round to the 2021 Pirelli Welsh National Rally Championship.

The series continues on Saturday 4 September with the Eventsigns Woodpecker Stages.

Further details on the 2021 Motorsport UK Pirelli Welsh National Rally Championship, together with registration information, can be found online at: wnrc.wamc.org.uk 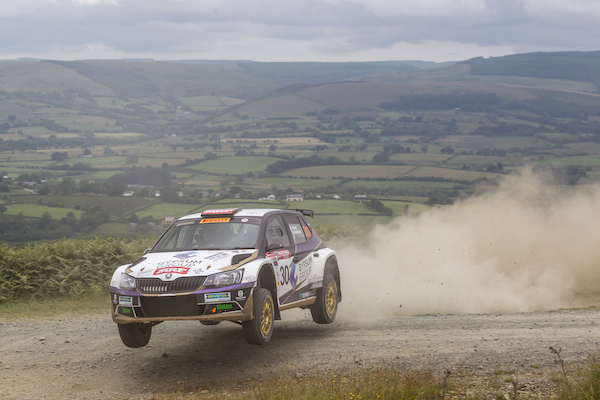