After a 518-day enforced break caused by the Covid-19 pandemic, the Motorsport UK Pirelli Welsh National Rally Championship roars back into action next weekend. The Nicky Grist Stages (Saturday 10 July) will feature one of the largest fields of championship contenders ever gathered, all gunning for points in pursuit of title success.

Covid-19 restrictions have seen motorsport in Wales halted, barring a few exceptions, since the Visit Conwy Cambrian Rally on 8 February 2020.

But now, finally, rallying in the Welsh forests is returning - with an unprecedented demand for places on the start list. This level of interest has produced a quality field of drivers and co-drivers and a vast array of cars unlike anything seen for many years.

Also in a new car for this year is the 2019 Welsh Junior champion, Tom Llewellin. Tom, co-driven on this occasion by Ross Whittock, makes his competition debut in a four-wheel-drive Mitsubishi Mirage. Elsewhere in the field, Paul Walker/Geraint Thomas have exchanged their Mitsubishi for a Subaru Impreza.

With great rallies to learn their skill and the lure of a magnificent prize of a test drive in a PCRS Rallysport-prepared Hyundai i20 R5 (courtesy of OnThePaceNote), the Junior category is buoyant again this year. George Lepley/Tom Woodburn will compete in their Mitsubishi Evo X, Ioan Lloyd/Sion Williams will move up from the Formula 1000 Junior Championship (and a few great road rally results) to a Peugeot 208 R2, and Zak Hughes/Ian Beamond bring their Renault Twingo R2 Evo.

Other Under-25-year-old hard chargers to look out for include Aoife Raftery/Dylan Doonan (Ford Fiesta), Charlie Todd/Glyn Thomas (Ford Fiesta) and Gethin Price/Matthew Baddeley (Nissan Micra). Lining up alongside will be Jason Black/Karl Egan (Toyota Starlet) and Maxx Bradshaw/Liam Andrew Whiteley, who travel from the Isle of Man in their Mitsubishi Evo III.

More than 50 crews are eligible for the RAVENOL UK Welsh Challenge, which rewards drivers and co-drivers who have yet to finish in the top 10 overall of a Championship round and is open to any competitor in any class.

The new class for Road Rally spec cars has sparked a lot of interest, with the likes of Graham Thatcher/Tim Samuels (Peugeot 206) and the Escort Mk2 duo of Ricky Crone/Daniel James and Rob Wood/Osian Davies battling for early class honours.

Such is the inclusive class structure of this year's Pirelli Welsh National Rally Championship that a driver and co-driver are likely to be eligible for multiple awards. David and Toby Brick are a great example of this, as the giant-killing Vauxhall Nova crew will be battling for honours in the Overall, RAVENOL UK Welsh Challenge, Two-Wheel Drive and Over 50s categories!

"With just a few days to go, perhaps it's time to reflect on the massive undertaking by all stakeholders involved in making this happen. Events of this stature under normal circumstances take up to eighteen months to organise. Add in a pandemic, and the timeframe is the same, but the commitment required over the same period is immeasurable.

"The rally fraternity, though, has responded as only they can with a fantastic entry received in an unbelievable fifteen minutes.

The Nicky Grist Stages contains 44 stage miles spread over eight stages - with a loop of four gravel tests through Llyn Login, Monument, Halfway and Crychan forests in the morning and repeated in the afternoon following a midday service halt at the Royal Welsh Showground in Llanelwedd.

Spectators are not permitted to watch in any of the stages nor the service area. Instead, the Pirelli Welsh National Rally Championship will broadcast live from the event on its Facebook page. Experienced motorsport broadcaster Sideways Media will be filming the action, with driver interviews and expert analysis from Howard Davies and Eifion Jones.

After each round, a 30 minute edited highlights package will be produced, dedicated to the Welsh National Rally Championship runners, and broadcast on the Championship's Facebook and YouTube channels.

The Plains Rally, which was scheduled to take place on Saturday 14 August, has been cancelled - meaning that the 2021 Motorsport UK Pirelli Welsh Championship will now consist of five rounds, with the best four scores to count. Round 2 will now be the Eventsigns Woodpecker Stages on Saturday, 4 September.

Further details on the 2021 Motorsport UK Pirelli Welsh National Rally Championship, together with registration information, can be found online at: wnrc.wamc.org.uk 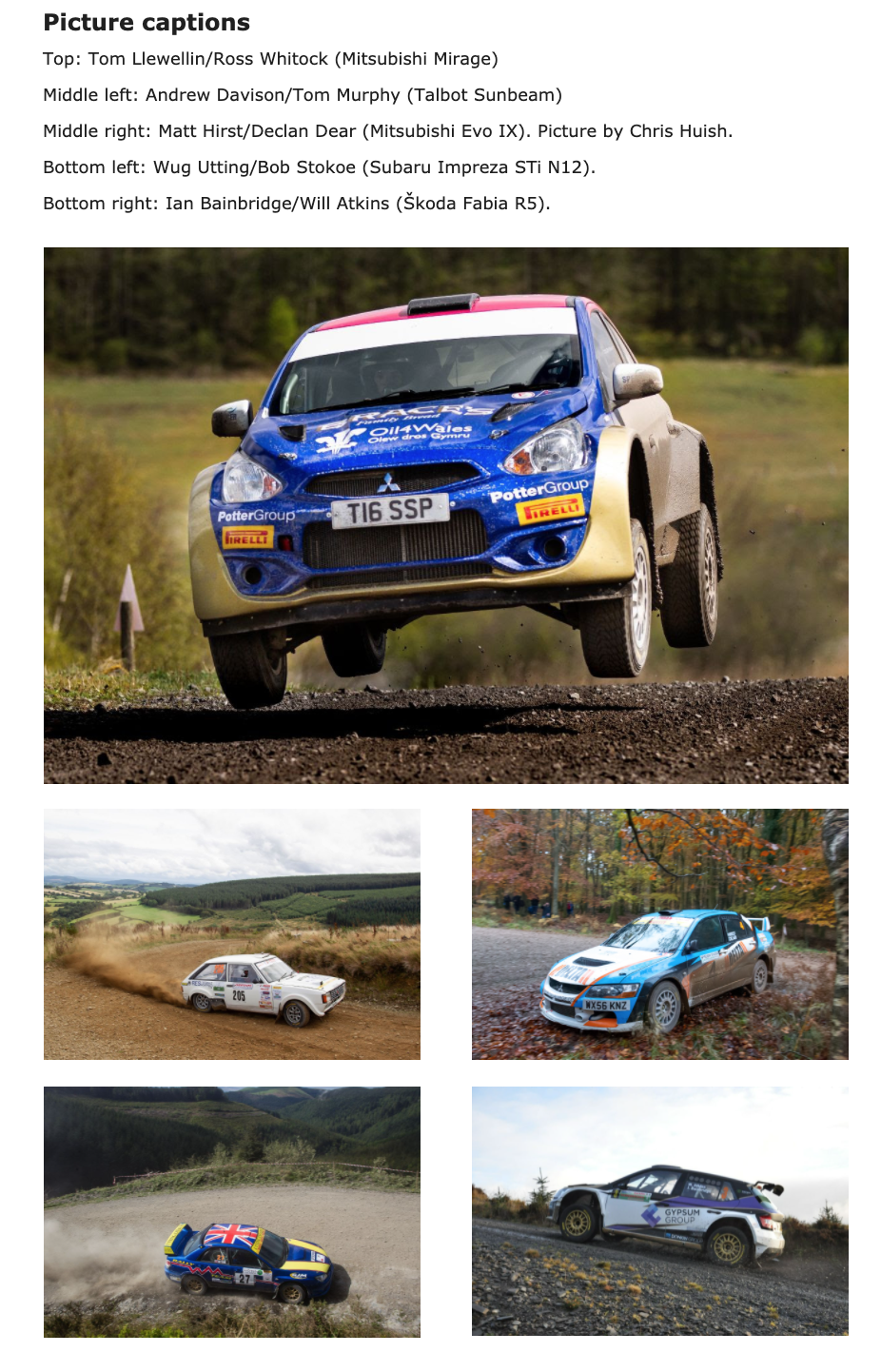